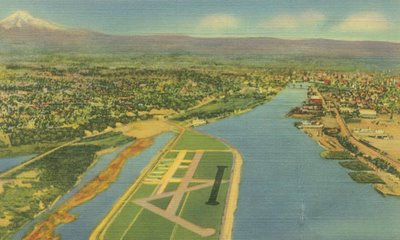 The Overlook Neighborhood area in the 1930's looking south on the Willamette River and the Portland Airport on Swan Island. (Click on pictures to enlarge).

A version of this article appears in the July / August 2006 issue of Overlook Views.

The Overlook Neighborhood is at the far southeast corner of North Portland, the part of on the peninsula between the Willamette & Columbia Rivers.

From another perspective, it can be said that the neighborhood sits on parts of , , and as the peninsula is built of debris washed down the during the cataclysmic ice age Missoula Floods. 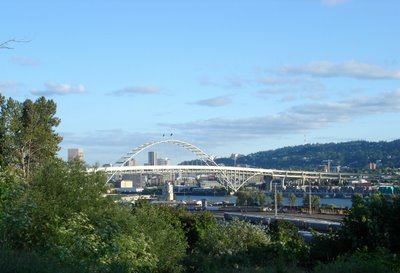 The official boundaries of the Overlook Neighborhood are west of Interstate 5, north of the and south of . According to the most recent census (2000) the neighborhood had a population of 6,093 people living on 2,121 acres. Overlook has a population density of 2.87 persons per acre.

With so few people per acre, why doesn’t the neighborhood look and feel like a suburb?

It is because over half of the land within the Overlook Neighborhood Association has no residences at all. and the Mock’s Bottom industrial areas as well as the Union Pacific rail yards are all technically within Overlook. When ’s neighborhood association boundaries were drawn in the early 1970s, those areas were included due to concerns about traffic passing through the neighborhood on the way to Interstate 5.

Without and Mock’s Bottom, the neighborhood is half as large and twice as dense. 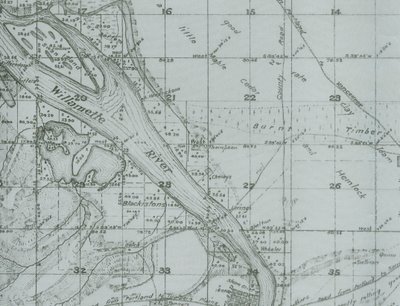 Overlook sits on seven of the original area claims that were awarded to early settlers in the 1840s. North of today’s were the claims (from west to east) of Phillip T. Smith, Josiah Atkinson and Evander Howe. South of Killingsworth was Frederick Proebstel’s, George Darch’s and Jonathan Gerow’s claims. Below was the claim of James Thompson. His farmhouse was located in the area where meets

Four other Pioneer Donation claims were on the marshy flood-plain beside the river. Lemuel Hendrickson’s claim was . An 1852 map described the area on the bluff as having “gently rolling soil, good second rate clay loam. Timber: fir, a little maple, cedar and hemlock.” 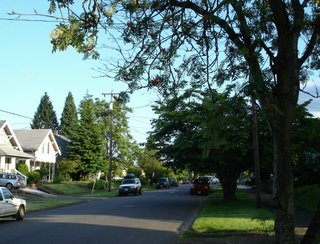 Delaware Avenue between Jessup and Killingsworth. The boundary between the Josiah Atkinson (left, east) and Phillip T. Smith (right, west) pioneer donation land claims runs down the center of the street.

As time passed, the donation claims were divided into smaller lots, farms, pastures and woodlots. Roads appeared on the bluff. In 1890 the Willamette Bridge Railway built a steam powered passenger railroad through the area. It followed the future alignment of Killingsowrth to Greeley, then on to Lombard and west to St. Johns, (then an independent city). Eventually the line was electrified and incorporated into the streetcar system. 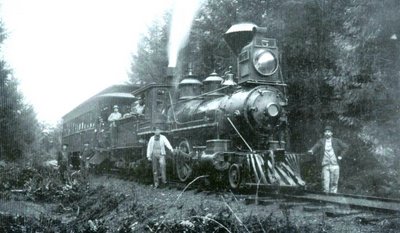 The Willamette Bridge Railway's #5 on the steam line on the bluff between Albina and St. Johns in 1890. The photo is from the new book "Portland's Streetcars" by Richard Thompson and is provided courtesy of the author. The book is availiable at Powells Books. 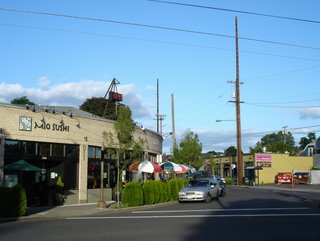 Mio Sushi, Sal's Famous Italian Kitchen, the Sagittarius Bar and Grill and the SohBet Coffee House on the corner of Killingsworth and Greeley where the streetcar line turned north on its way to St. Johns. The building on the left was built to accomodate the curve of the tracks.

Before it was a part of Portland, the area was in the city of Albina. In 1891, just before Albina consolidated with Portland and East Portland, it expanded from its core near Russell and Williams streets all the way north to the Columbia River. Although the area was inside city limits, it was still rural in nature with only a few scattered Victorian era farm houses on the bluff. 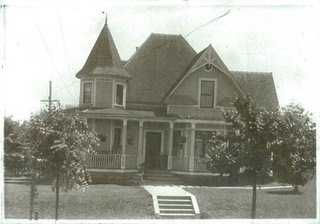 The Eliot / Sullivan house on Willamette Blvd near Denver Ave in 1912. The house was built in 1902, a fine example of early architecture in the neighborhood. It is currently being restored.

Development came from the south and east. Additions were plated and streets established. New houses were built as ’s northern suburbs expanded along streetcar lines. By 1897 much of the area south of Killingsworth had been plated and by 1907 most of the today’s neighborhood’s streets were in place. In many places the houses were still fairly far apart. Even after the housing boom which followed the Lewis & Clark Centennial Exhibition in 1905, the area had some feeling of the countryside. As late as 1915 there were complaints about stray cattle in the neighborhood. 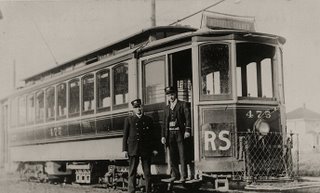 Portland Railway Light & Power car #475 at the end of the Russell-Shaver Line on Shaver between N. Castle and Concord some time before World War I. The house visible in the background is the back of #4048 Castle, a half block away. The neighboring houses in the area were yet to be built. The RS line ran until 1937 when it was replaced by a gasoline bus extension of the 39th Avenue Line. The service was abandoned in 1953. 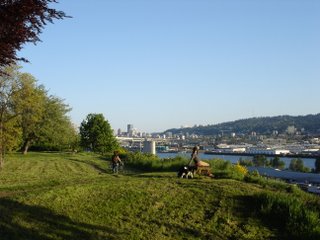 The "Nameless Park" on the bluff between Prescott Street and Skidmore Court.

Twenty three additions or tracts of various shapes and sizes make up today's Overlook Neighborhood. Most of their names have fallen out of use although Madronna Hill is still associated with the general area along Greeley. The name Overlook comes from the Overlook Addition, the area south of Skidmore and west of Interstate. It was surveyed for development in 1905, after the land had been tied up in a legal dispute for years (which explains the lack of any Victorian era houses in that area). The Cooks, Multnomah, First and Second Patton and North Albina addiditions were all split by the construction of Interstate 5 in the early 1960s. The Nutgrove addition is along the east side of Campbell between Killingsworth and Ainsworth. It is five blocks long but only one lot deep. 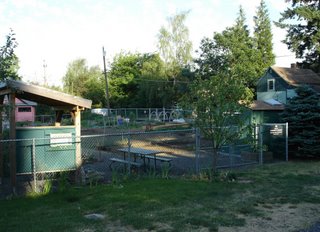 The Beech Community Garden is in the three block long Pittiger's Addition. It is said that some of the houses in the area escaped demolition by being moved there out of the path of I-5 in the early 1960s during the construction of the Minnesota Freeway. 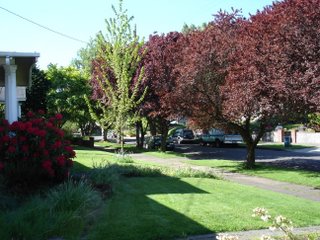 Longview Avenue, is four blocks long and is entirely in the Overlook Addition. Plated in 1905, the street predates Longview Washington by 18 years.

In was created as part of #1 by combining the north end of and the south end of . The remaining portion of Patton south of was renamed . New segments were graded down the bluff to Albina and north to the new . The first auto shops and billboards followed soon after. 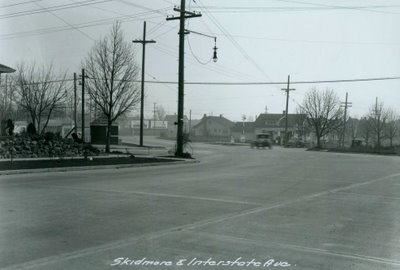 Interstate Avenue from Skidmore circa 1930-1931, looking toward the present location of the Archiform Building and Fire on the Mountain Wings.
Oregon Historical Society photograph, used with permission.

Many sights of the neighborhood in the 1930s would be recognizable to today’s residences. A housing boom in the twenties had filled the majority of the vacant lots in the area. Killingsworth, Interstate and were the main commercial streets. Interstate Avenue was part of Highway #99 and was lined with motels and service stations. was open for the neighborhood’s children. had just been created on land that had been used as a dump. St Stanislaus Church had Sunday services. The Interstate Firehouse was in use -as a firehouse. 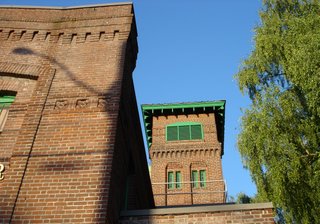 The Interstate Firehouse Cultural Center next to Patton Park. 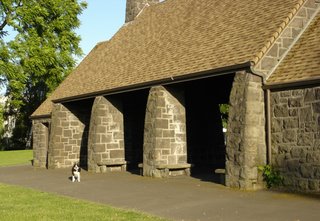 As early as 1903, John Olmsted in his plan for Portland parks proposed "Multnomah Park" at the future location of Overlook Park. For many years the site was used as a dump. Robin explores the picnic building at Overlook Park, built in the 1930s.

The sounds of the neighborhood were different though. The constant shriek and moan of whistles from steam locomotives, boats and ships came up the bluff from below. Douglas DC-3s and Lockheed L-10 Electras droaned as they circled above the new Portland Airport on Swan Island. The rumble and clatter of streetcars could be heard on Killingsworth, Greeley and Shaver. The gong of service bells rang from the many gas stations on Interstate Avenue. 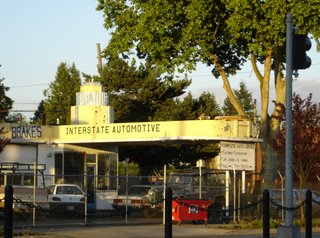 Interstate Automotive is inside of the last surviving 1930's era gas station on Interstate Avenue. 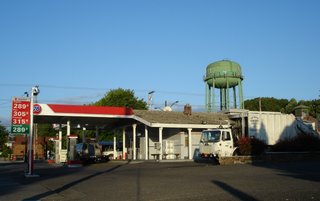 The 76 station at N. Killingsworth and Interstate is one of the busiest service stations in the city.

The shipyard was built on the site of the Airport which had outgrown its location. Around the clock, workers constructed T-2 tankers for the war effort. At night work continued beneath the bluff under massive light towers that cast a glow visible for miles. 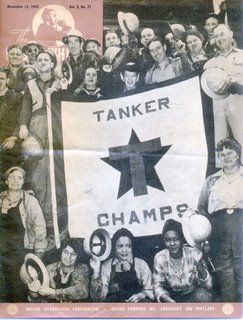 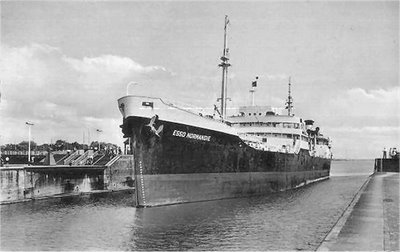 The USS Ochocco was a T2 tanker built at Swan Island in 1943. She is shown here after the war as the Esso Normandy. She was scrapped in 1961.

Many houses in the neighborhood took boarders to alleviate the housing shortage brought on by the influx of wartime workers. On Interstate Avenue, workers and residents rode a new trolley bus line to work and home.
Years later, in 1959, Bess Kaiser Hospital was built on the bluff over the former site of the Kaiser Swan Island shipyard. 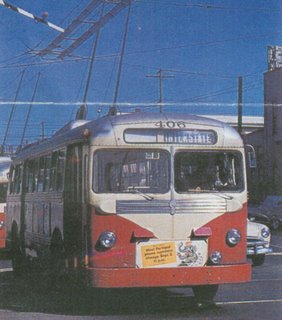 A trolley bus (trolley coach) operated by the Portland Traction Company on the Interstate Line. Clean , very fuel effecient (!) and quiet, the trolley coaches operated in Portland from 1937 until 1958. They still do in Vancouver BC, Seattle and San Francisco. No one knows why they do not in Portland. A cynic might think that General Motors had something to do with it. 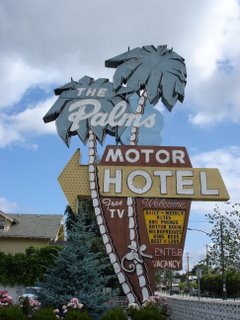 The sign at the Palms Motel, a surviving example of 1940's Highway #99 architecture.

The biggest single change the neighborhood ever faced was also its most detrimental. On March 23, 1960 the Portland City Planning Committee approved the alignment on the Minnesota Freeway, the route of Interstate 5 through North Portland. By the time I-5 was completed 1963, hundreds of homes were displaced. Some houses were moved but most were torn down. A resident of the time recalls neighbors rescuing plants from deserted yards after the houses were demolished.

A swath was cut through sundering long established connections. Many businesses closed on both sides of the divide. A report by the Portland Planning Bureau from 1964 stated: “Completion of the Minnesota Freeway has had a telling effect on traffic counts in the district. has experienced a drastic reduction in traffic volumes.”

The decline of Intestate had negative effects on the surrounding neighborhood. Concerns about crime, safety, vandalism and traffic from were some of the issues that lead to the formation of the Overlook Neighborhood Association in the early 1970s. 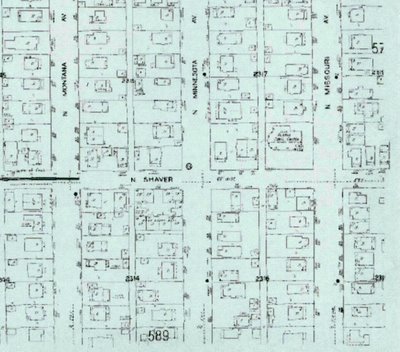 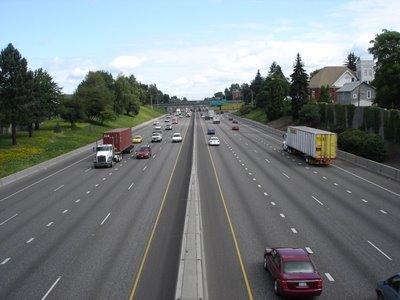 The segement of I-5 through North Portland is also known as the Minnesota Freeway. The picture above is from the Failing Street pedestrian overpass at the former location of Minnesota and Failing streets. The same location is shown on a Sanborn Insurance map from 1950. Note the chuch in the map at the corner of Shaver and Missouri is to the right in the picture.

Today the neighborhood is in the midst of a vital upswing as the value of a close-in and close-knit community becomes apparent. There is a farmers market at . Restaurants have returned to Killingsworth and grocery stores to Interstate. Along the former route of the trolley bus of the 1940's and 1950s development is following the two year old Interstate Max line. Nearby is exploding with activity. Kaiser Permanente re-affirmed its long standing ties to the area by expanding its Interstate campus. adidas renovated the Bess Kaiser hospital for use as its corporate headquarters; adidas Village. The , St Stanislaus Church, Overlook House and are all community gathering places.

It is a great time to live in Overlook. 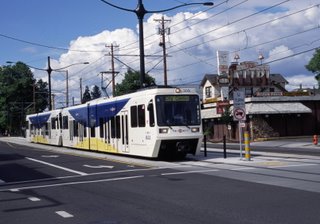 The Interstate Max line passes The Alibi at N. Shaver and Interstate Ave in 2004. The Alibi is said to be on the site of the Chat-n-Nibble, an establishment dating from the late 1890's. Later, the location was a tavern called Max Alibi. In 1947 it was renamed The Alibi. It is a holy place of Tiki Nation. The Russell-Shaver streetcar line crossed Interstate Avenue at this point until 1937. 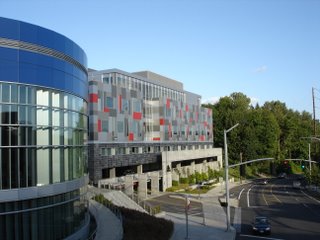 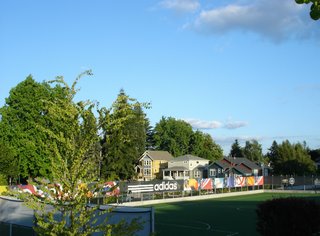 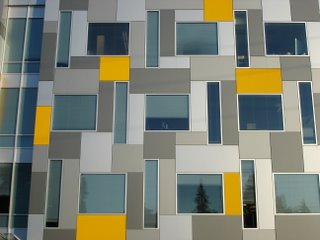 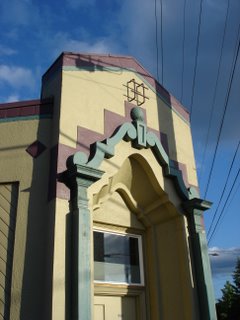 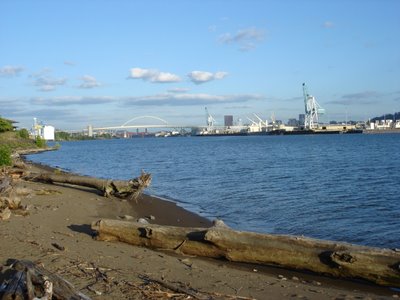 Underlook: The Willamette River from Swan Island near the Freightliner offices. In 1806, a party lead by William Clark came up the "Multnomah River" to a point near this location while the rest of the Lewis & Clark expedition was camped on the Columbia.