Through a fun house mirror... 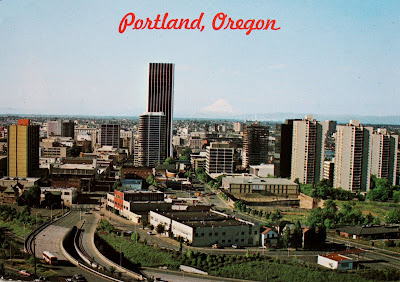 Portland 1974: The imminent departure of an unpopular President. Fresh memories of war. Financial turmoil. An energy crisis. It's hard to avoid the sense of deja vu. The mid-1970s are familiar, even to those who did not experience them. At the same time they are distant, ever receding into the past.

Richard Nixon was President. Neil Goldshmidt was mayor. Connie McCready, Frank Ivancie, Mildred Schwab and Charles Jordan were on the city council. Vera Katz was in her first term in the state legislature. Women would not be allowed to join the City Club until that fall.

Portlanders could eat at the Ringside, Genoa, Hubers, Rheinlander and the Republic Cafe, as well as Henry Thiele's, the River Queen, L'Auberge, the Union Avenue Social Club and the olde England in a box-car themed Victoria Station on Macadam Avenue.

There was no "Big PInk" but there was a Blue Mouse building. There was Tri-Met, but no bus mall. PIoneer Courthouse Square was still a parking lot. The Fremont Bridge was less than one year old.

In 1974 the Portland State University yearbook staff created "A Portland Family Album," a yearbook focused on Portland rather than the University.

"...a collection of Portland's people. No big buildings, no Rose Festival parades; just people. People stopping for us, talking to us, sharing a few moments of this year and of their lives."

In format it is a standard yearbook. Written with an eye toward the future, it is a time capsule of a turbulent moment, a core sample the Portland of 1974. Thirty four years later, it is as striking for its similarities to the present as it is for for its differences.

What follows are excerpts from "A Portland Family Album."

"...A photograph and pen can save those moments in time, and since 1974 is an unusual year, we wish to record it for future years. In taking the pictures of this book, we tried to be as honest and straightforward as in taking a snapshot for a family album, and we prefer to think of the book in just those terms: a family album -A Portland Family Album." 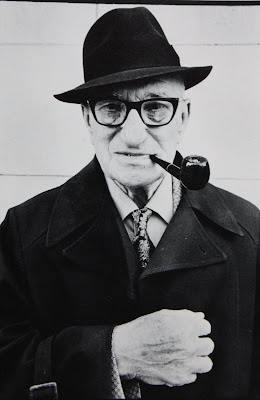 "Well, I'll tell ya. I'm only eighty so I can't tell you a whole lot about it (Watergate). I think its the worst disruption of government in a long time. I've been in Portland since 1909. I can't say anything against it. Portland isn't a flashy city, it isn't a go-getter like San Fransisco. But there's one thing about it: you've got the climatic conditions that are a whole lot better than other places. You don't have any hard winters and there aren't hot summers. By gosh, its just about as good as a fellow wants to get." 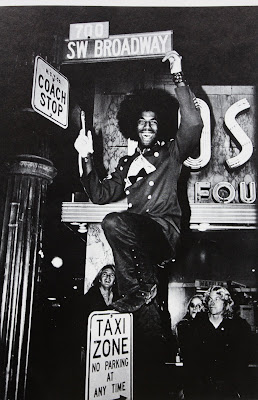 (Note the Rose City Transit bus stop, a remnant of the pre Tri-Met era, still around five years after the formation of the transit agency). 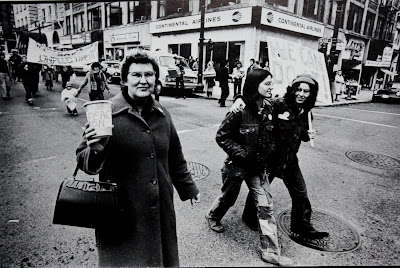 ("We can do it!" at the corner of Broadway and Yamhill. The Continental Airlines office is now the location of Joseph K. Wedding Rings and Pizzacato).

Do you like America? This question was put to many Portland people at the public library. It's not a deep or leading question, but it provided an opportunity to respond in a personal manner. 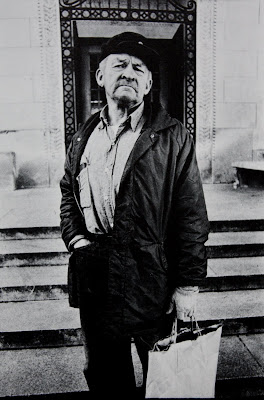 "Sure I like America but I don't like the bind we're in right now with Nixon's administration. I could see it coming and told my brother-in-law that if he voted for him, he'd be scratching his ass with his elbow." 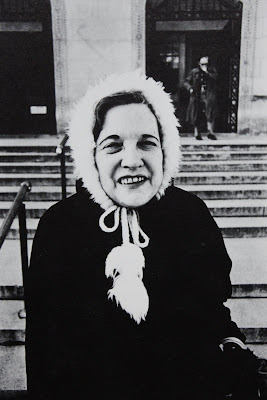 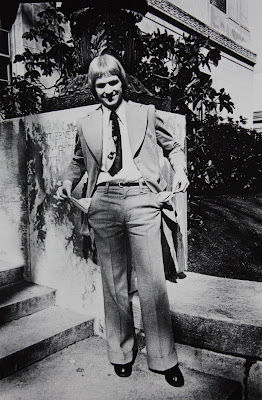 "I just feel in the middle of everything, and I really care. I've been a conscientious objector, a draft resister, a freedom fighter, and a rock thrower, and now I'm almost apathetic. When you get to a certain age you just have to fit in. I like America. I think that a whole lot of America's original ideals are gone. It's progressing closer to a dictatorship than most Americans believe it to be. I can see it, they can't... I'm lost in the crowd." 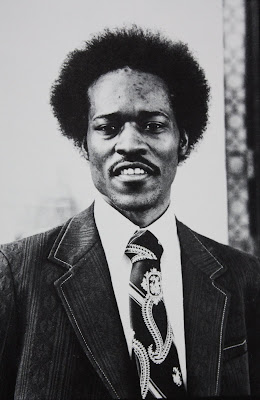 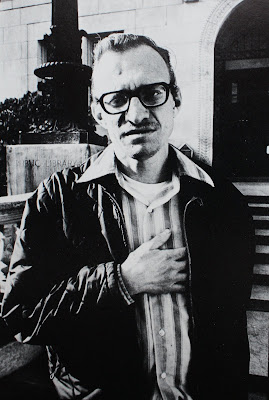 "I'm a chauvinist American nationalist! You see that flag waving over there? Well, if it was Chinese or Russian then I wouldn't be here. I'd be six feet under." 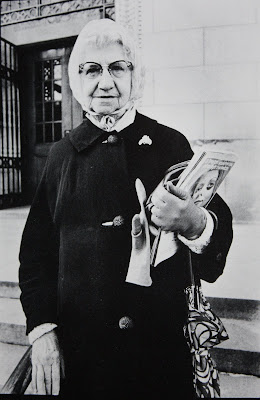 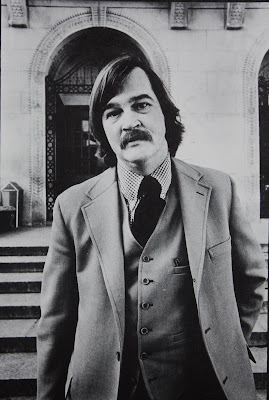 "I think the thing that is going to cut it with a lot of people is the fact that Nixon paid less income tax than you or me. He'll either resign by July or be impeached in August."

(Richard Nixon would resign the Presidency on August 9, 1974). 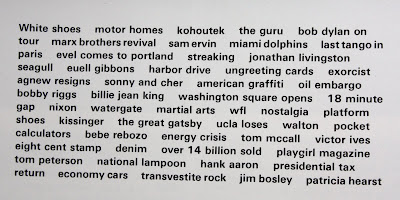 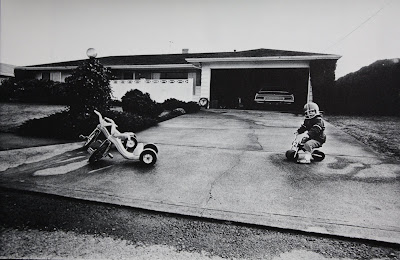 "We have a nice home. The kids can play out front and the things we need are close by." 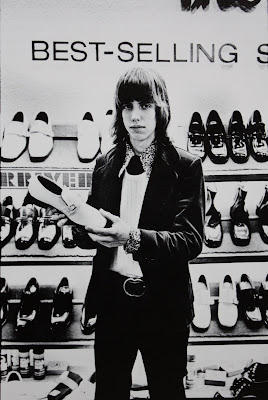 "Business is great. It may look like the store is empty but actually the place is jammed. they're just very small people. The white shoes are selling like hot cakes. How are hotcakes selling? Like white shoes. It's against company policy for me to hold white shoes but I'll hold one for you anyway. But our best selling model, believe it or not, is that hideous looking brown one over there. It's the one the Marx Brothers used to wear." -Shoe salesman at a local shopping center. 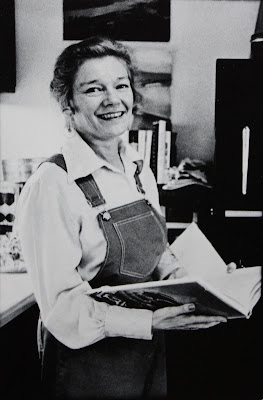 Mrs. Leo: "Portland is a livable city; interesting and unique. We've valued the environmental assets of the area and not allowed heavy industries in. This is due in part to the public interest groups we have, like OSPIRG and good leaders like Goldschmidt and McCall. But there are some definite problems in Portland, like the amount of smog and noise produced by cars. We moved to the Portland Center because it's close to events downtown and we want to personally conserve energy... I feel that, because of the population growth, living in apartment complexes will be a future trend. It will mean sacrificing some individuality in order to live in close, family like groups. It won't be as isolated as suburban life." 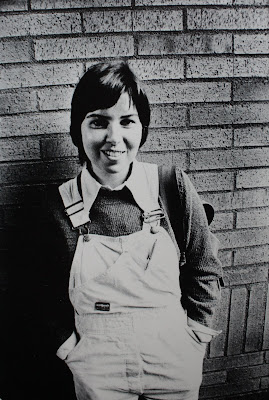 Joanne: "I've always lived in Portland, except for a year in Corvallis and a year in Europe. I like the city, especially the convenience of its size. It's a nice place to live, but pretty boring to visit. There's nothing to do here that can't be done in any other city. About the only thing I really don't like about Portland is its closed-mindedness. The people here will still wait for the WAIT signs..." 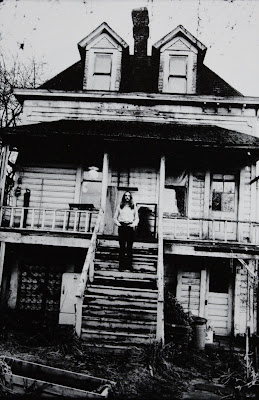 Harold: "...I live in a house built at the turn of this century, in a small remnant of a neighborhood now decimated by freeways and urban renewal. Portland is now my home, and except for minor things like I-205, Ivancie, and the lack of good restaurants, I enjoy living here. 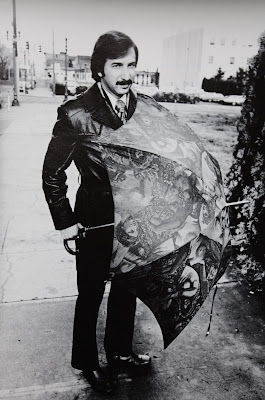 "No, I don't want to be seen holding the American flag. But you can take a picture of me holding this umbrella with the naked ladies on it." 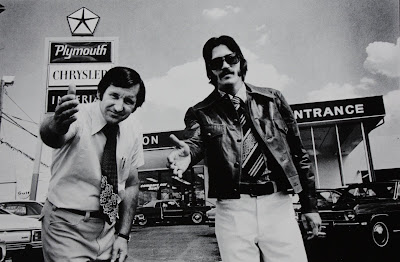 "There's a list of standard equipment that includes a 350 cubic inch V-8, a turbo Hydromantic Transmission, power steering and front disk brakes. And there is a wide range of options too. From an Automatic Climate Control to an electric rear window defogger and a Cruise Master Speed Control. But it doesn't stop there..." 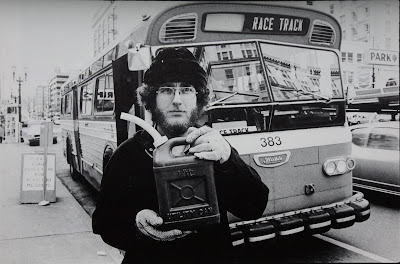 "It's funny how a plant that lived milloins of years ago could play such a vital role in a future life. Just what plant would have thought that it could be responsible for the powering of a four thousand pound creature that can cross a continent in less time than it takes for a single leaf on a plant to sprout and mature." -Bus rider.


"A Portland Family Album" concludes with:

Blood boiling issues like the Agnew resignation, the Saturday Night Massacre, Nixon's tapes, the gas shortage, and price gouging were mostly topics of street conversation and office arguments. At home it seemed less meaningful to talk about the national isuues when the cost of the food we we ate was enough to ruin dinner. If flood victems and mass murders weren't dinner subjects then neither was Watergate. And yet, every American felt the pressure of the news: the chilliness of a living room, the waiting in gas lines, the attempt to file an honest tax return, the tension of an insecure job market.

In Oregon we deceided that those gas line could be untangled and gave it a try that became known nationally as the Oregon Plan; we sacrificed our outdoor activitiy lights, warm homes, and colored lights at Christmastime, and some street lights went off as well until the rains came again -every drop a kilowatt.

In Portland we decided to value our neighborhoods more than a complete freeway grd; we decieded to go ahead with some postitive attractions for downtown -a transit mall, a waterfront plan*.

It was just a question of doing what we could, making the changes or adjustments day by day, block by block. Mostly 1974 was the year that Americans realized that the past is connected to the future, all the people of the world are connected to each other, all aour backyards are next to a neighbors back yard.

*Both Waterfront Park and the Portland Transit Mall would be completed in 1978. 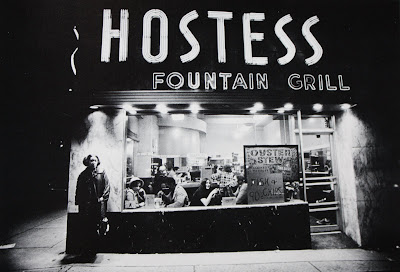 Late Friday night downtown. (The Hostess Fountain Grill on the corner of Broadway and Yamhill, now the site of the south east entrance of Nordstroms). 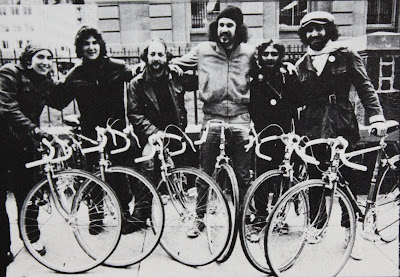