The Poppelton Building and Harker Building on First near Yamhill.


I often try to re-create Portland's first downtown along the river in all its cast-iron splendor. The city's architecture, unique to the entire region in its scope and scale, was the earliest manifestation of Portland's singular essence of place outside of its natural setting. Currently the Architectural Heritage Center is providing a wonderful chance to experience Portland's emergence as a major city with Cast-Iron Portland.

The exhibit features fixtures from many of Portland's vanished architectural treasures: the Abington, Smith and Watson, Cooks and first Sherlock buildings, including a golden griffin from the Kamm Block, and an iron wolves head from the Ladd Block, which was torn down overnight in 1965 in a shameful episode after its ownership learned that the PDC recommended the building be preserved.

Cast-Iron Portland is not only a story of loss, but of revival. A slide show on a wide-screen monitor features photographs of many of Portland's surviving cast-iron buildings in dilapidated condition before restorations completed over the last forty years. The transformations are stunning and hint at what can be accomplished in the future.

The Architectural Heritage Center is open Wednesday through Saturday, 10am to 4:30pm at #701 SE Grand Avenue.


"That's one of the reasons why the streets grow duller and duller. If there is anything curious, anything beautiful in a street, they take it away and stick it in a museum." -from the short story "N" by Arthur Machen.

But not everything interesting ends up in a museum. On the wall in Jake's Famous Crawfish hangs on of Portland's more historic paintings, Villard's Ruins, by Portland artist Francesca Grothjean (1865-1945).

The painting, in a Romantic style suited for crumbling antiquities, was of ruins anything but ancient.

In 1883 Portland was connected to the national rail network via Henry Villard's Northern Pacific Railroad. Villard reasoned that the terminus of a trans-continental rail line would need a first class hotel. He purchased the block bounded by 6th, 7th, Morrison and Yamhill then began work on what was anticipated to be Portland's new palatial showpiece.

The completion of the railroad had financially over extended Villard. Work stopped on the hotel after only the foundation had been completed. For six years, Villard's ruins, as they were known, lay fallow, a civic frustration (and twice a crime scene) until the project was resuscitated by Portland's usual plutocrat suspects.

The Hotel Portland would be at the center of city life until being torn down in 1951. Much of Villard's ruins still lie beneath Pioneer Courthouse Square.

Separated by one block to the west and 126 years; the suspended Park Avenue West tower, what might be called "Moyer's ruins."

Thanks to the fine folks at Jake's Famous Crawfish, who not only allowed me to photograph their painting, but even offered me a chair to stand on.

The Art of the Pass 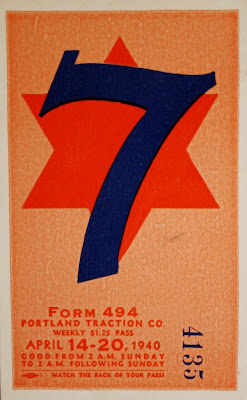 
By the 1930s, Portland's transit network was in desperate need of modernization. Most of the city's streetcars had been built before World War I and were showing their age. Ridership decreased as maintenance costs rose. Fairs, constrained by franchise, were locked in place by the city. To isolate the financial loses from its electric utility corporate parent, the transit lines were re-organized, first as the Pacific Northwest Public Service Company, then as the Portland Traction Company, with little visible changes to the riding public. The once world-class system was the topic of angry newspaper editorials and the city council agenda.

Portland Traction city lines car #439, near the east end on the Broadway Bridge on the Bridge Transfer line, so named because it connected each of the routes that crossed the downtown bridges on the east side of the river. (Click on pictures to expand).

The situation began to be addressed in 1932 with the introduction of fifteen modern streamlined streetcars. Built by Philadelphia's J.G. Brill Company, they were soon nicknamed the "Broadway cars" for their initial assignment on the line that connected northeast Portland to the premier entertainment district downtown. 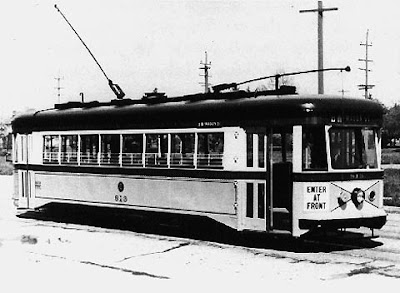 As delivered, the "Broadway cars" had gray sides with an ivory window band that was bracketed by hunter green borders, with black roofs and striping. The complex paint scheme lasted only a few years before being replaced by simplified green and cream colors, which were in turn replaced by maroon and cream in 1940. No known color photograph of the original paint scheme is known to exist.


"Three new modern cars went into service yesterday on the Broadway line and did a rushing business. It seemed that passengers wanted to try the new cars and loaded them to capacity, often allowing the old-time cars to pass by to permit them to ride the new cars." -The Oregonian, May 16 1932.

The cars were popular with the public and soon found use on many of the systems heavier trafficked lines. They did nothing however to address the problem of moribund track and infrastructure. It would not be until the 1937 adoption of electric buses, aka "trolley coaches," as told in the post Off Line Too Soon, that a turn-around of Portland's public transportation system took place. 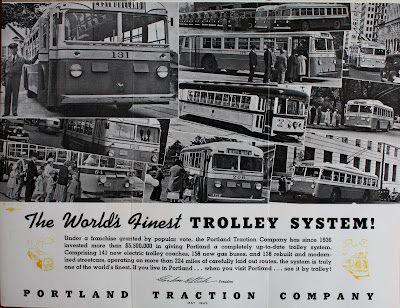 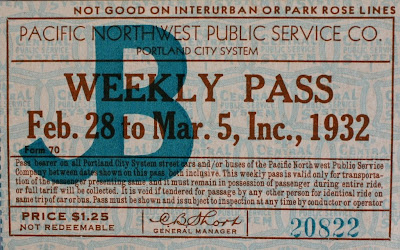 A typical weekly transit pass from the early 1930s.


New equipment was not the only way to re-engage the public. Starting in the mid-1930s, Portland Traction mounted a campaign that transformed the utilitarian weekly transit pass into a colorful showcase of community life.

The passes, created by anonymous graphic artists, provide a view of Portland's depression era values, pride, aspirations, hidden prejudices, current affairs and in some cases, out and out whimsy.

What follows is a small sample of the colorful stand-out design of Portland Traction's transit passes, from the middle of the Great Depression to the start of World War II -The art of the pass... 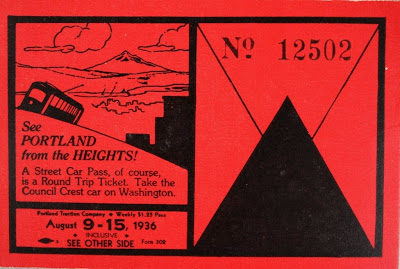 "See Portland from the Heights." Even though the amusement park atop Council Crest had been closed for seven years, a trip to the top of the line was still viewed as worthwhile in its own right. 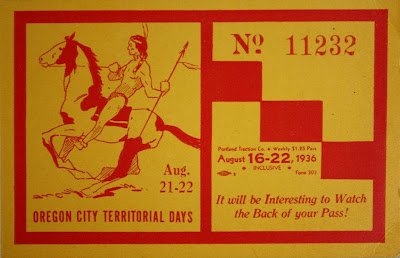 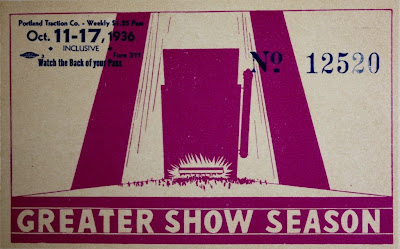 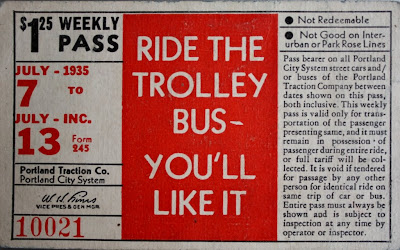 "Ride the Trolley Bus- You'll Like It" advertises the downtown test loop built to gauge public acceptance of electric buses in 1935. On the flip side was a map (below). 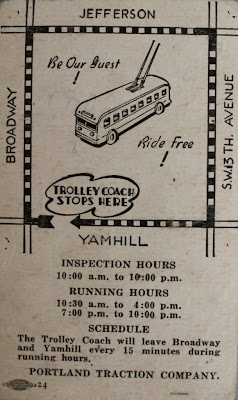 "Toward a Greater Oregon." 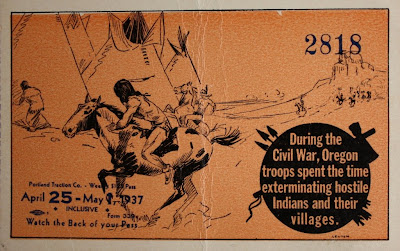 "During the Civil War..." is amazing for its bland, stark statement of self-evident justification, bereft of regret, apology or even euphemism. Not fighting, not removing... but exterminating. 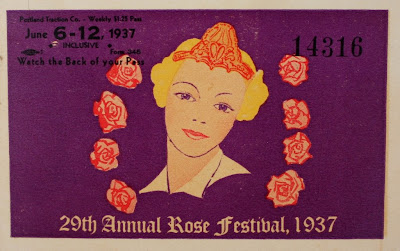 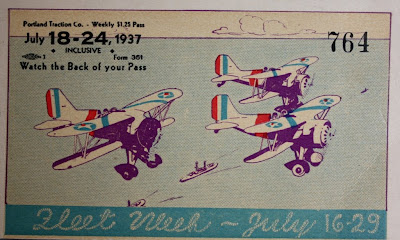 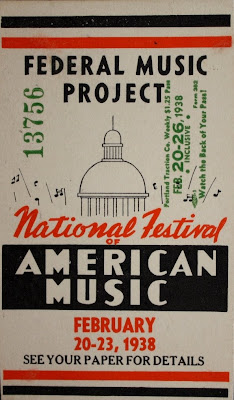 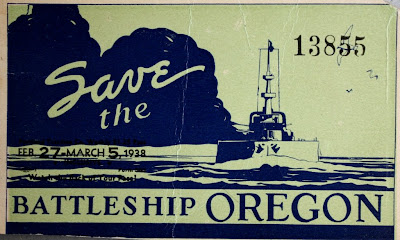 Save the Battleship Oregon- a successful effort, until a World War II scrap drive. 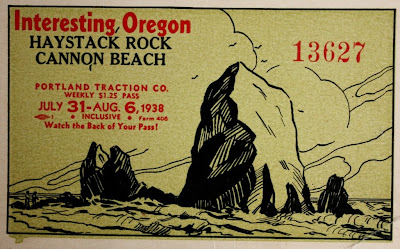 Haystack Rock, part of the "Interesting Oregon" series of passes that features locations throughout the state. 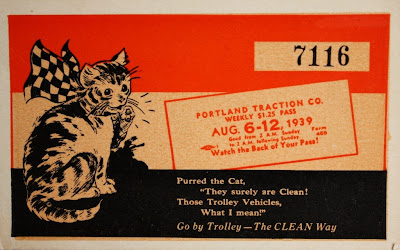 At least three passes features animals singing the praises of the new trolley coaches, in rhyme (!) 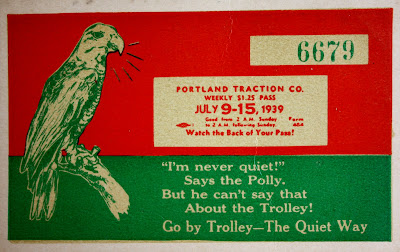 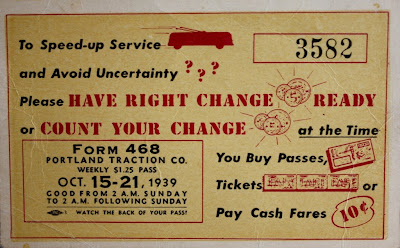 Tractionetiquette- have your change ready. 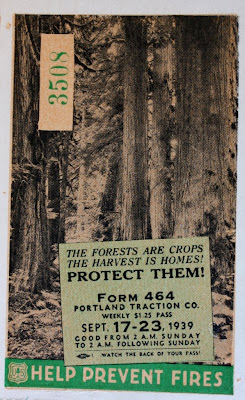 The forests are crops, the harvest is homes! 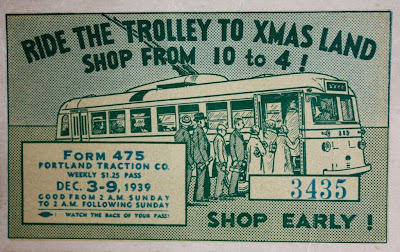 Ride the trolley to X-Mas Land. 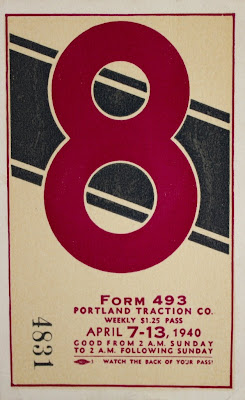 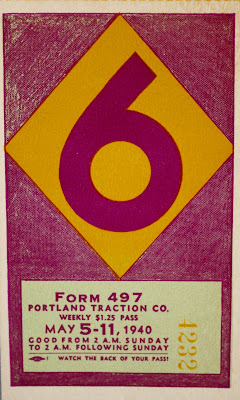 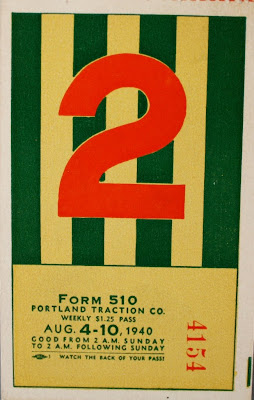 An enigmatic series of numbered passes from 1940 whose significance is unknown. 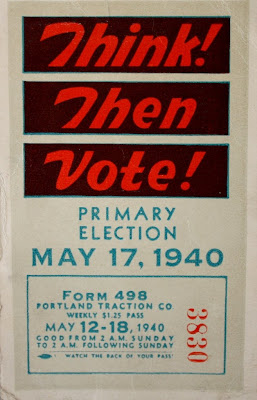 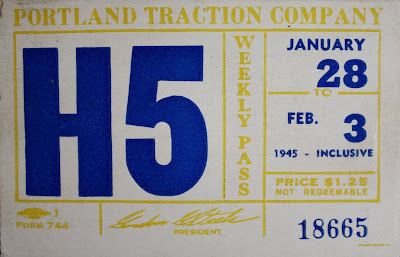 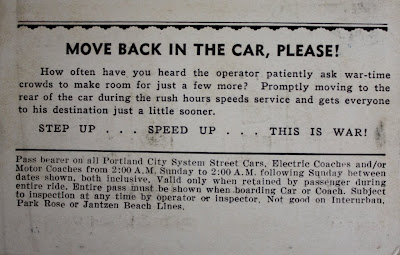 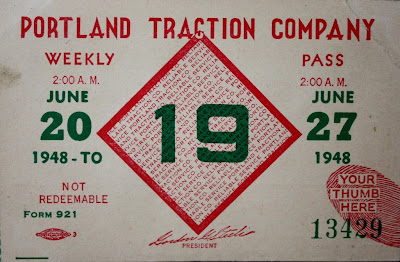 The post-war era brought little in the way of improvement, other than the handy thumb guide.

Passes were revived for monthly use in the Tri-Met era.

1977's passes featured a symbol for each month, in the case of June, a rose. In hindsight, a basketball would have been more appropriate. 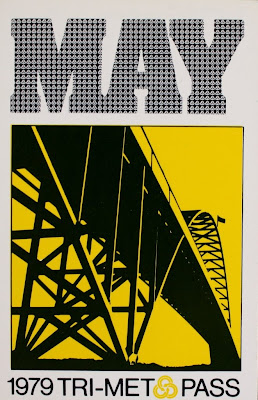 
Monthly passes continue to this day on Tri Met. They are colorful and functional, but have looked much the same for the last few years. In a city full of graphic designers, what might be possible? 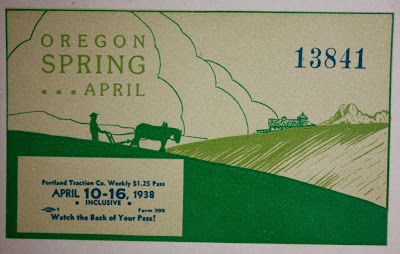 The "Broadways" on Burnside - In Color


After all but the final three streetcar lines were abandoned in 1948, the "Broadway cars" were assigned to the Twenty Third Avenue line that linked downtown with northwest Portland where they ran until the end of the original streetcar system in 1950. After abandonment two of the cars were re-gauged and transferred to the Portland to Oregon City / Bellrose interurban lines that ran until 1958. One of those cars, the #813, survives to this day and can be ridden on the Willamette Shore Trolley line between South Waterfront and Lake Oswego (service is temporally suspended due to trestle work).

The #807 turns off of Burnside on to Washington at 15th. The brick apartment building still exists, but the Studebaker Used Car Department building is now where the off-ramp from I-405 joins Burnside.