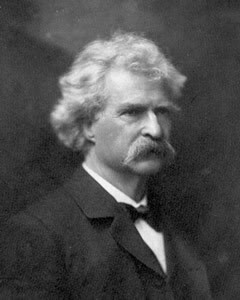 A world tour was not Samuel Clemens's first choice as a way to spend his golden years, but financial misfortune had made one a necessity. His publishing house, Webster and Company, failed in 1894 and his large investments in the Paige Compositor typesetting machine evaporated when the complex apparatus was made obsolete by the Linotype. A series of lecture engagements to span the globe was seen as a way to recoup some of his losses and pay off his creditors. It was under those circumstances that Mark Twain, sixty years old and in poor health, appeared at the Marquam Grand Opera House on Friday, August 9 1895.

He arrived at the nearly completed Union Station from Tacoma that evening with his manager, Major James B. Pond ("Pon" to Twain). His wife, daughter and the rest of his traveling companions had elected to stay behind in Washington. The night was warm, with the smell of smoke from distant forest fires in the air. He was shuttled from the station by coach on 6th Street to the Marquam Grand, where a standing room only crowd waited. 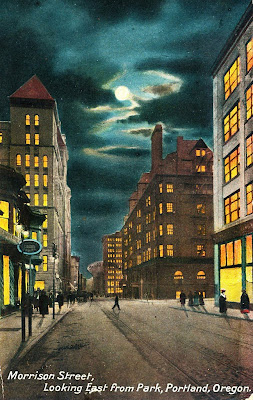 The Marquam Grand (left) where Twain appeared, and the Hotel Portland (right) where he stayed on August 9 1895.


Portlanders had flocked to the city's most opulent venue to see the noted humorist, whose reputation as a speaker nearly exceeded his as an author.

"With rare versatility, Mark Twain not only excels with his pen, but is equally at home on the platform, and captivates his audiences by the dry, droll, almost apathetic manner of which he brings out the wit and humor of his own productions."-The Oregonian, August 4 1895.


R.W. Mitchell, who had known Twain a quarter century before, wrote the Oregonian on August 7 1895:
"Mark Twain is greater today than he was 25 years ago. His fame is more permanent, and stands more prominently out, now that his fortune is gone. Reading him is good. Hearing him is 50 per cent better. It was the same way with Dickens."


Twain took to the stage in front of the "very fashionable and extremely large" audience. His loosely structured monologue featured excerpts from My First Theft, The Jumping Frog of Calaveras County, The Character of the Bluejay, A Fancy Dress Incident, A Bit More than He Could Chew, Tom Sawyer's Crusade, Fighting a Duel in Nevada and A Ghost Story, interspersed with digressions and improvisations. The audience was in high spirits, punctuating Twain's droll delivery with laughter. After an hour and a half, he left the stage, but was called back by the crowd for a rendition of The Stammer's Tale.

"...at its close the lecturer took occasion to thank his hearers for such a cordial reception on a summer evening, and expressed his sincere gratification that his meeting with the public of Portland was of such a substantial and pleasing character."
-The Oregonian, August 10 1895.

After the show, Mark Twain and his entourage proceeded two blocks west to the Arlington Club for a dinner hosted by Twain's long time friend, Charles Erskine Scott Wood, where he held court with some two dozen of Portland's Haut Ton set. He then retired to the Portland Hotel. 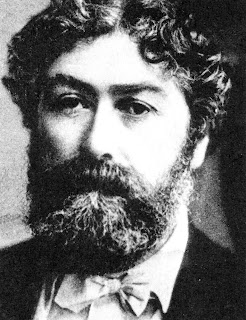 Portland attorney and author Charles Erskine Scott Wood was a long time friend of Samuel Clemens. In 1882, while assigned to West Point as an aid-decamp to General O.O. Howard, C.E.S. Wood helped facilitate the anonymous publication of Twain's ribald farce "1601". Twain would later write of the work" "if there is a decent word findable in it, it is because I overlooked it". 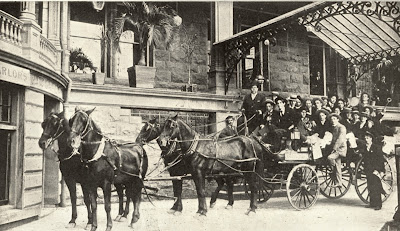 L.L. Hawkins at the reins, outside the Portland Hotel on June 18 1895, three weeks before Mark Twain departed there for Union Station. -City of Portland Archives


The following morning, Twain, wearing a blue nautical cap, stood outside the Portland Hotel as his bags were loaded into the coach to take him to Union Station.

"Dozens of people came up to reach over the array of handbags and shake hands with Mark Twain. Most of them claimed to have met him before, and his face wore a rather puzzled look sometimes as he was reminded of the various places and occasions where he had met them in days gone by."-The Sunday Oregonian, August 11 1895.

When the bags were loaded, Twain, Major Pond and the Oregonian's reporter boarded his coach for Union Station. As they rode down 6th Street he commented to the reporter:

"Portland seems to be a pretty nice town and this is a pretty nice smooth street. Now Portland aught to lay itself out a little and macadamize all the streets like this. Then it aught to own all the bicycles and rent 'em out and so pay for the streets. Pretty good scheme eh? I suppose people would complain about monopoly, but then we have monopolies always with us. Now in European cities, you know, the government runs a whole lot of things, and, runs 'em pretty well. Here many folks seem to be alarmed by government monopolies, but I don't see why. Here cities give away for nothing franchises for car lines, electric plants and things like that. Their generosity is often astounding. The American people take the yoke of private monopoly with philosophical indifference, and I don't see why they should mind a little government monopoly."

The conversation continued about Twain's next book of travel writing.

"It will be a lazy man's book. If anyone picks it up expecting to find full data, historical, topographical, and so forth, he will be disappointed. A lazy man, you know, don't rush around with his note book as soon as he lands on a foreign shore. He simply drifts about, and if anything gets in his way of sufficient interest, it goes into his book." 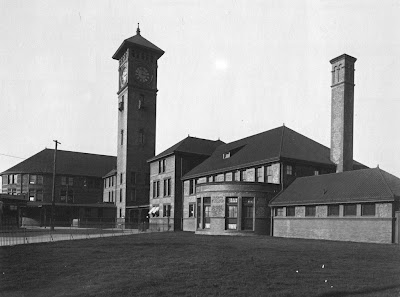 The newly completed Union Station, circa 1896.

Twain left the coach and entered the temporary station facilities with Major Pond and the reporter from the Oregonian in tow. Noticing the finishing touches being applied to the new depot he inquired:
"There must be some reason why a town like Portland has not long since built a new depot. What is the reason?"

The reporter explained that tow of the railroads serving it had passed into receivership, which delayed construction (a major depot had been planned for Portland since 1883).

Twain concluded his interview in the smoking compartment of the Olympia car. He noted that, in novels, characters are drawn and re-combined from memory:

"We mortals can't create, we can only copy. Some copies are good and some are bad."

He bid farewell as the train prepared to depart.

"Well, I haven't had an opportunity to see much of Portland, because, through the diabolical machinations of Major Pond over there, I am compelled to leave it after but a glimpse. I may never see Portland again, but I liked the glimpse." 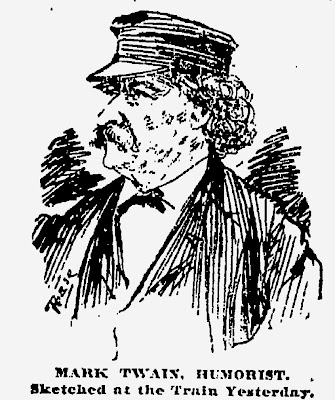 Mark Twain at Union Station, from the Sunday Oregonian, August 11 1895.

Twain continued the Northwest leg of his tour with appearances at Olympia, Seattle, Victoria and Vancouver before departing for Australia. He would recall his sojourn in the region in his "lazy man's book" published two years later.
"It was warm work, all the way, and the last fortnight of it was suffocatingly smokey, for in Oregon and British Columbia the forest fires were raging."
-Following the Equator, a Journey Around the World, by Mark Twain.

The world tour was a success and within three years he would be out of debt. Despite his ill health on tour, Mark Twain lived for fifteen years after his Portland appearance. 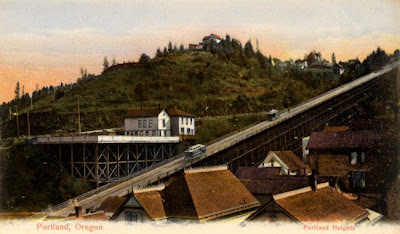 Those in Portland not fortunate enough to escape the smoke to Seaside or Long Beach had a variety of activities to choose from the weekend of Mark Twain's visit.

At the regular Free Suffrage meeting the conversation was on the "topic class" presented by Abigail Scott Dunaway to leading society ladies who wanted to be informed on the equal suffrage question.

At Fourth and Morrison, crowds flocked to the new beer hall opened by the Schlitz Brewing Company. The Oregonian wrote: "The beer was delicious and a positive revelation to those who had never been fortunate enough to taste the product of a great brewery." Perhaps in response, admission to the Gambrinus beer garden near 23rd and Washington was free.

Meanwhile, south of town along the Macadam Road at the White House's race track, a bear baiting proved a disappointment to a "party of well known sportsmen" when the two year old black bear, after cuffing about the eleven dogs sent after him, made friends with the pack.

At the other end of the entertainment spectrum, for those wanting to escape the dust of the city, if not the smoke from the forest fires, relief was a cable car ride away to Cable Park, atop Portland Heights, for a concert that featured selections from Verdi and Strauss.

The story of the forgotten park, and the attractions to be found there, will be the subject of the next installment of Cafe Unknown. 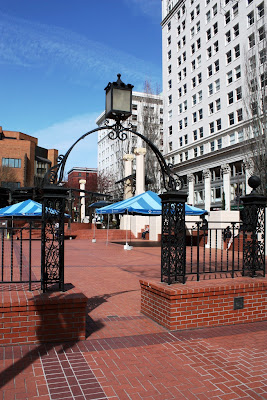 Original iron work from the fence of the Portland Hotel, restored to its original location at Pioneer Courthouse Square, a few yards from where Mark Twain departed for Union Station.