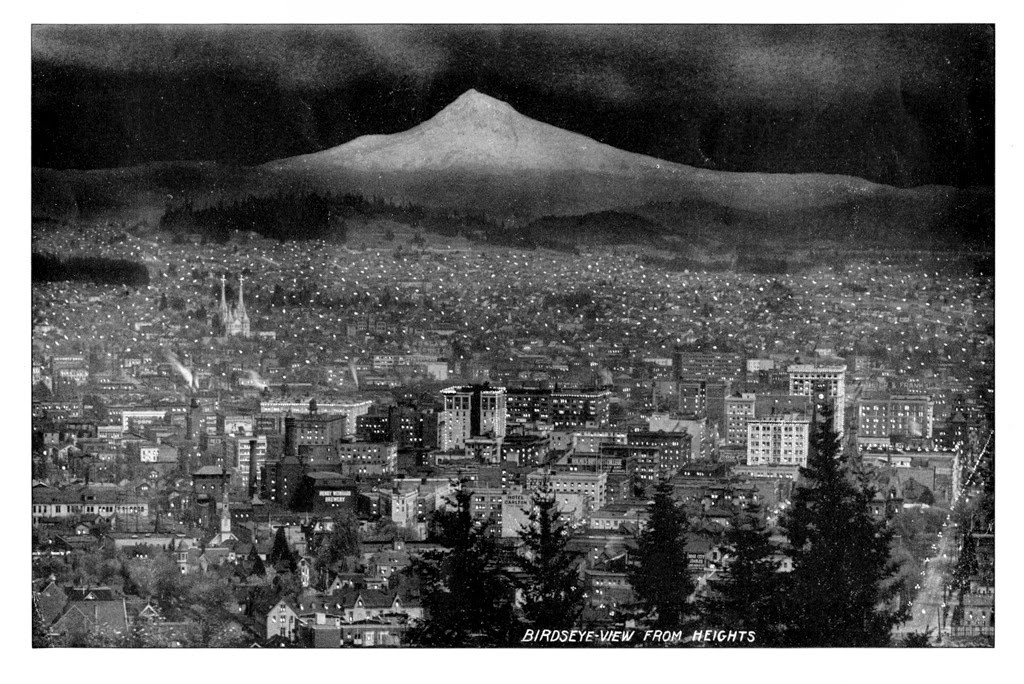 1913.  Portland glowed with incandescent warmth, a flickering metropolis whose illumination bespoke progress and modernity.  Gas and oil lights had been gone for a quarter century.  In residential neighborhoods, globes from electric arc lights hung from wires over streets.  Downtown, the light bulb reigned supreme.

"...If the sign has a shape or form distasteful to the average citizen, or even to the sensitive eye of a broad-minded artist, it constitutes a blot on the horizon and thereby checks the efforts of those working for the city beautiful."

To its boosters though, Portland's bright lights confirmed its status as a premier city of the west, a member of the winner's circle that included San Francisco, Oakland, Los Angeles, Denver and the upstart Seattle.

What follows is a tour of Portland in 1913, from Night in Portland, a booklet published by the Newcomb Publishing Company of New York.  The technique used to create it utilized photographs taken in the daylight, retouched to portray an idealized night, a common practice with postcards of the era. 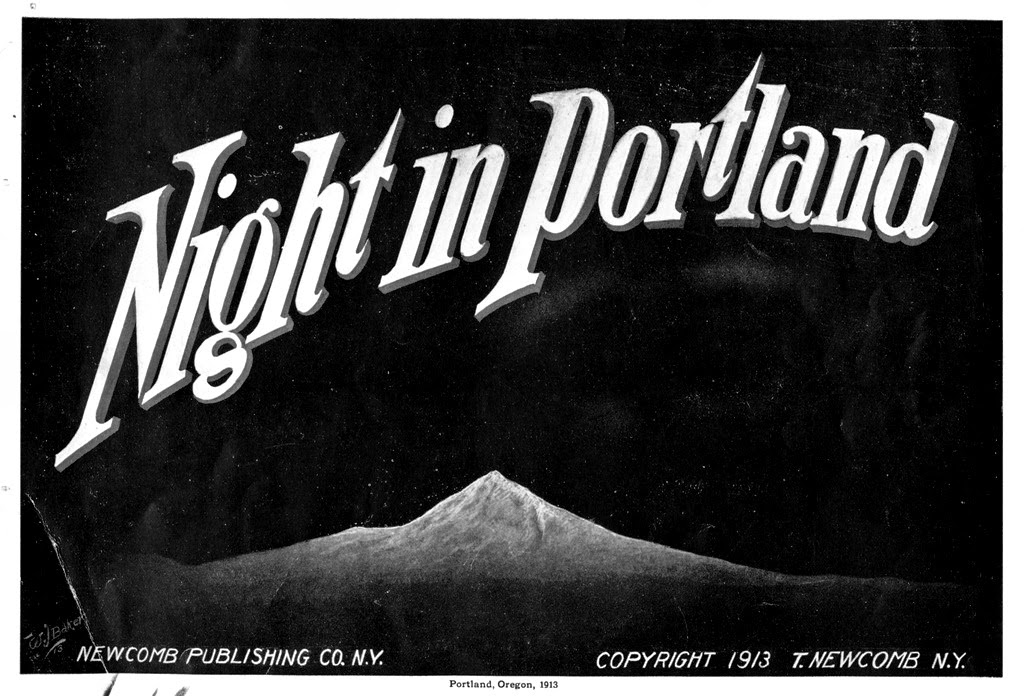 Night in Portland is hard to find.  In years of collecting and research, I have come across mention of only one copy, which I purchased on ebay, from a seller in England. 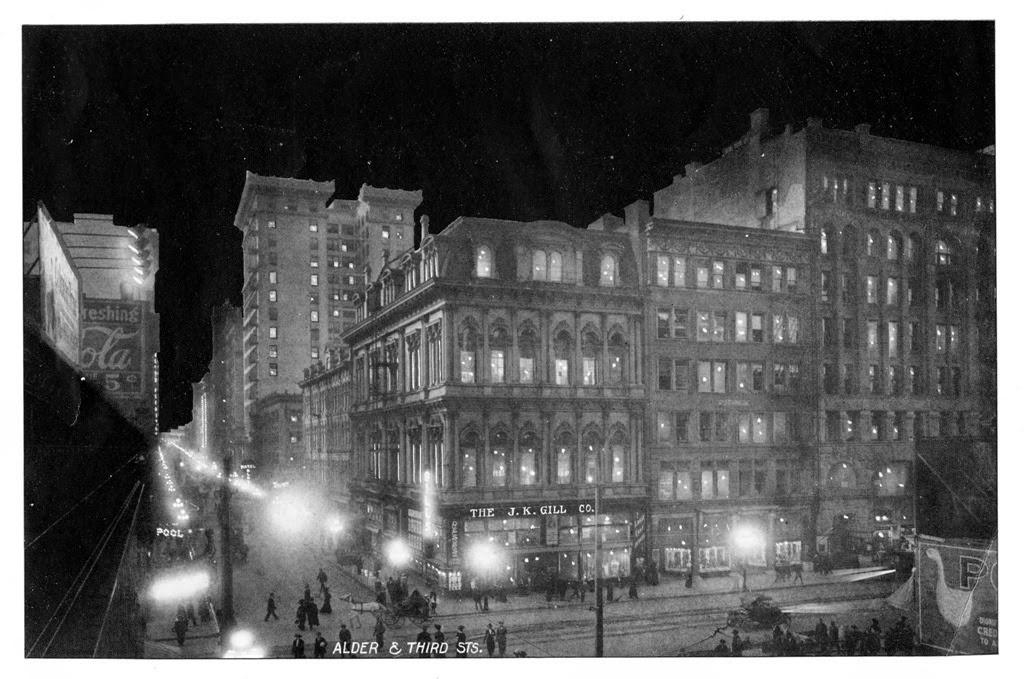 Alder and Third, looking west on Alder.  The large building on the corner is the former Masonic Temple.  When built in 1871 it towered above the wood framed houses that surrounded it.  In 1913 it was home to the J.K. Gill Company, sellers of books, stationary and postcards.  It was demolished in 1928.  The Hamilton and Dekum buildings, right, still stand. 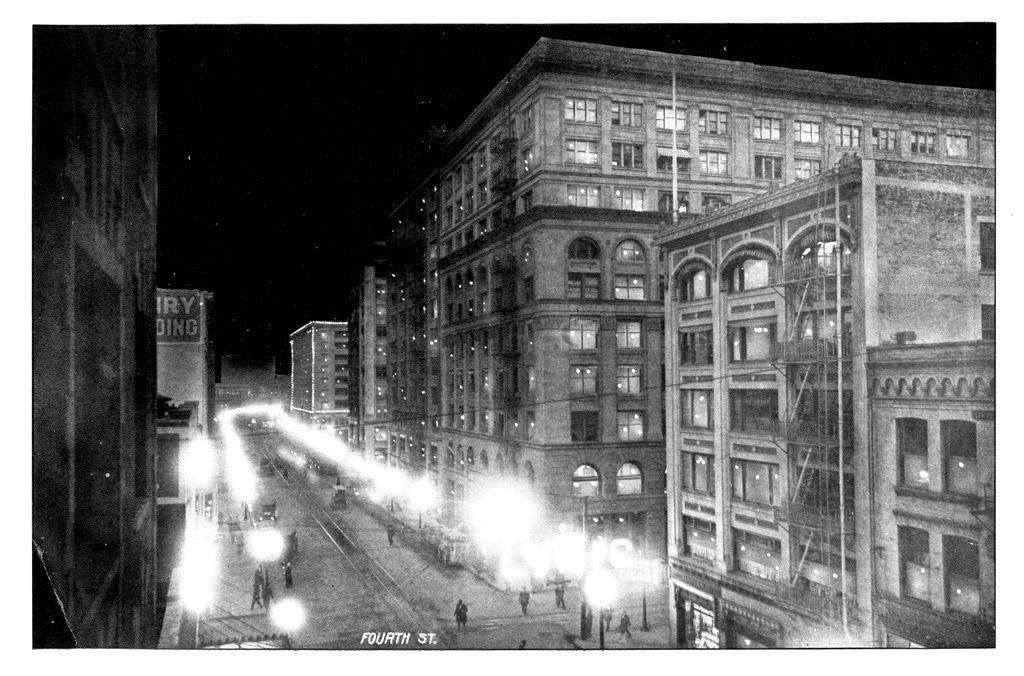 Fourth and Stark, looking north, on Fourth.  The Railway Exchange building is to the right.  Huber's restaurant had moved into it three years before.  Across Stark is the Chamber of Commerce building, its huge mass expanded by the floors added after a 1906 fire, at considerable expense to its looks.  It was torn down in 1934.  The parking lot that replaced is there to this day.  The outline of the new Multnomah Hotel (today the Embassy Suites) is lit in the distance. 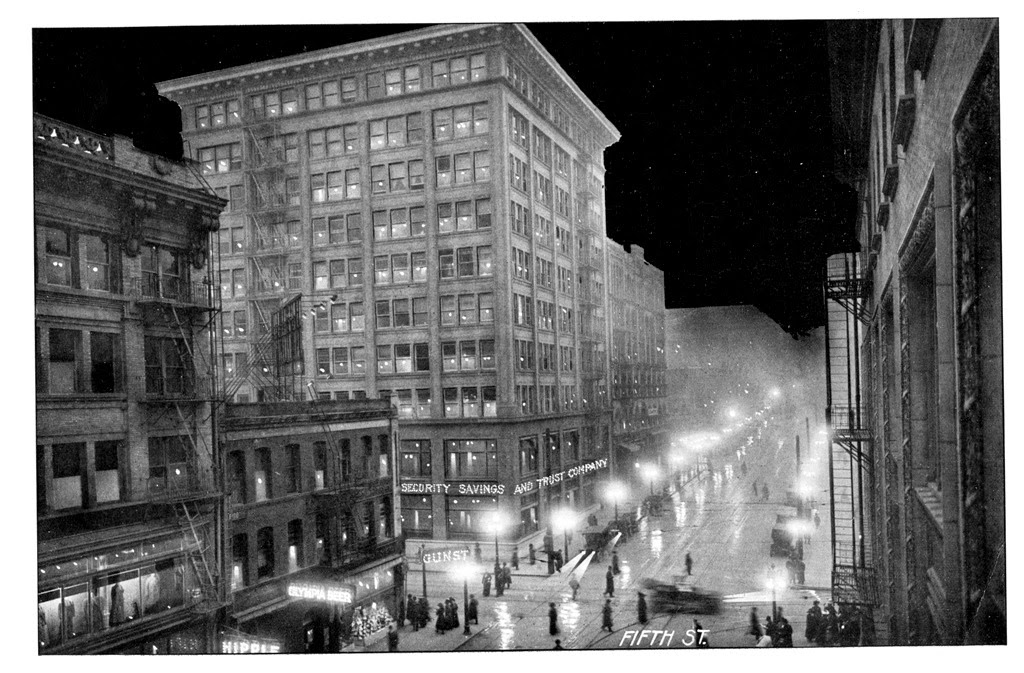 Fifth and Morrison, south on Fifth.  The Corbett building (center), and its neighbor, the Goodnough building, were torn down in 1988 to build Pioneer Place mall. 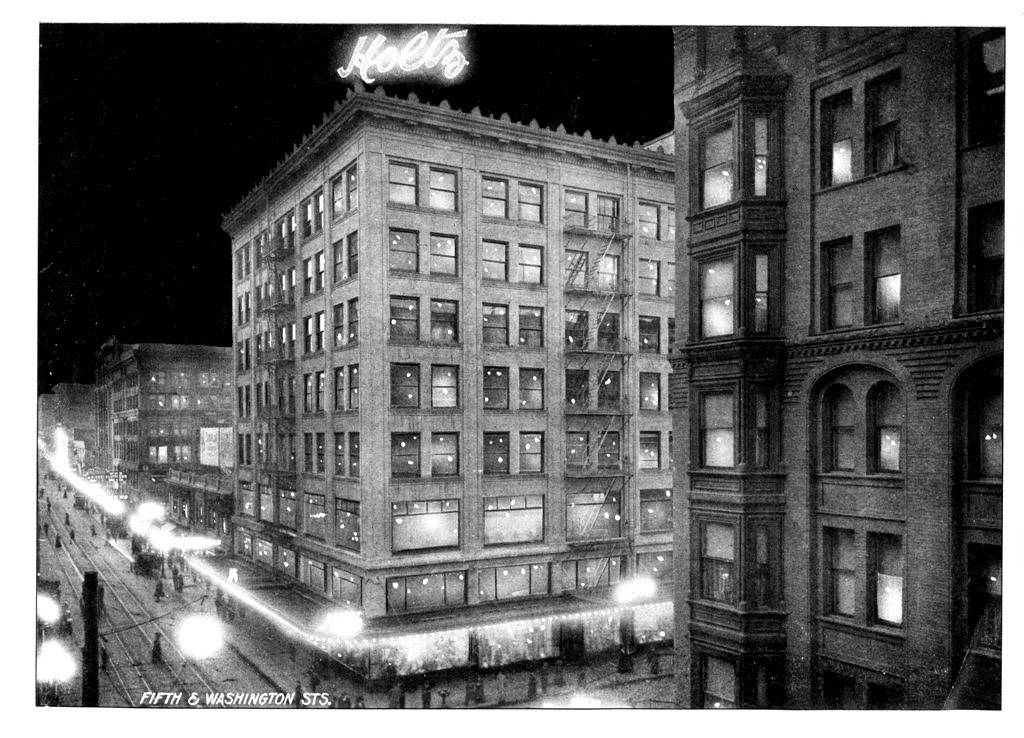 Fifth and Washington, looking west on Washington. The Holtz department store was opened the previous year by Aaron Holtz, a former Meier and Frank executive.  It lasted less than three years, closing September 1914.  The building, on  "Holtz Corner", still exists. 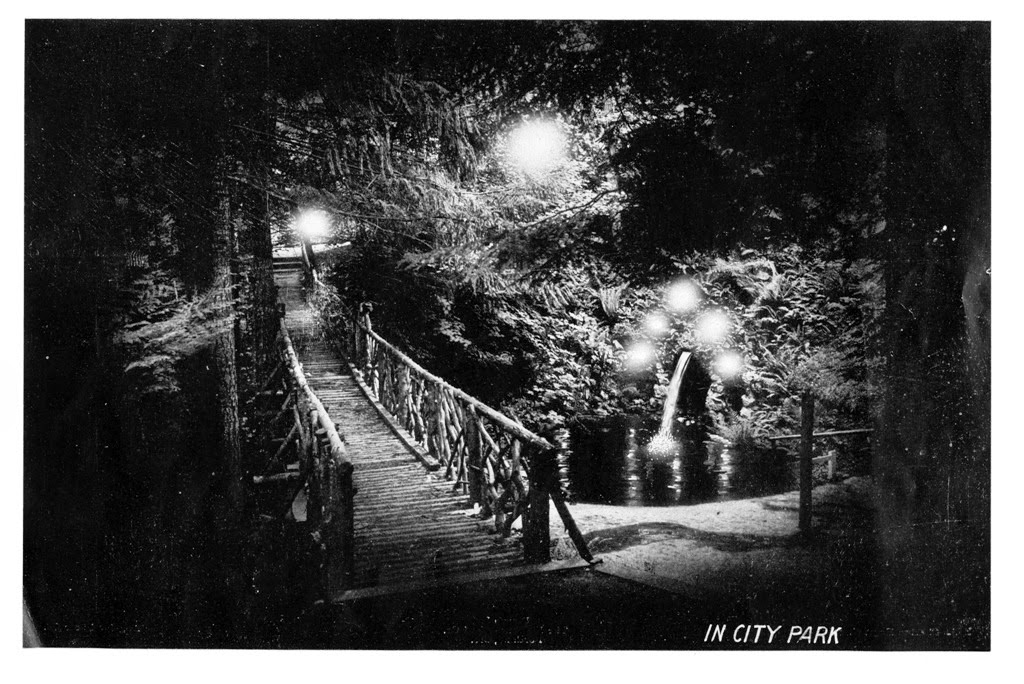 Although City Park had been changed to Washington Park in 1909, its older name is used in Night in Portland. 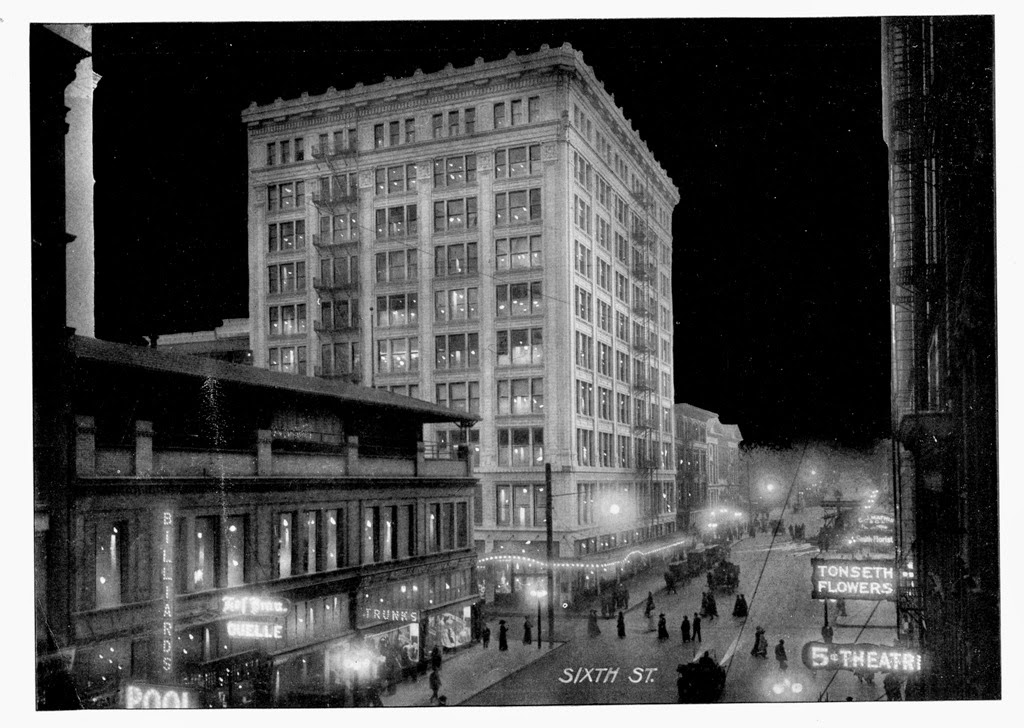 Sixth and Alder, looking south on Sixth.  Meier and Frank's terracotta clad retail palace had yet to expand to fill the entire block.  Tonseth Flowers (right) was on the first floor of the Oregonian Building (demolished 1950). 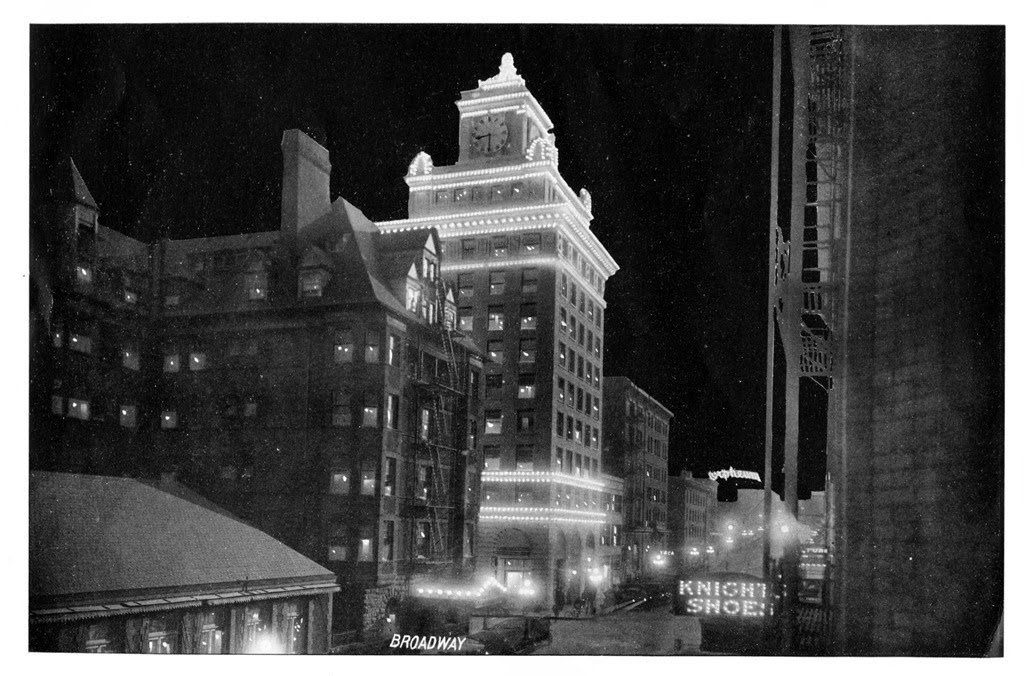 Broadway, south from Morrison.  Broadway was renamed from Seventh Street that year.  The Portland Hotel's less photographed west side and the brand new Oregon Journal Building (Jackson Tower) are to the left.  In the distance an electric theater sign hangs above Broadway. 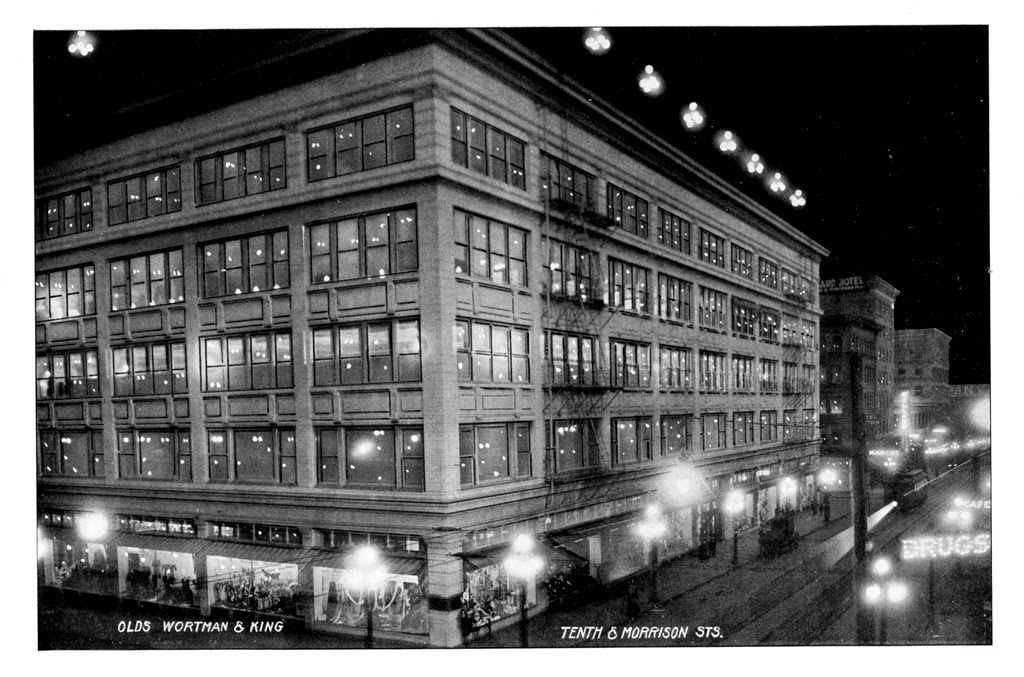 Tenth and Alder, looking south towards Morrison.  The Olds Wortman and King department store (1910) was the first in the northwest to take up a whole block.  Later known as the Galleria, today it is home of City Target. 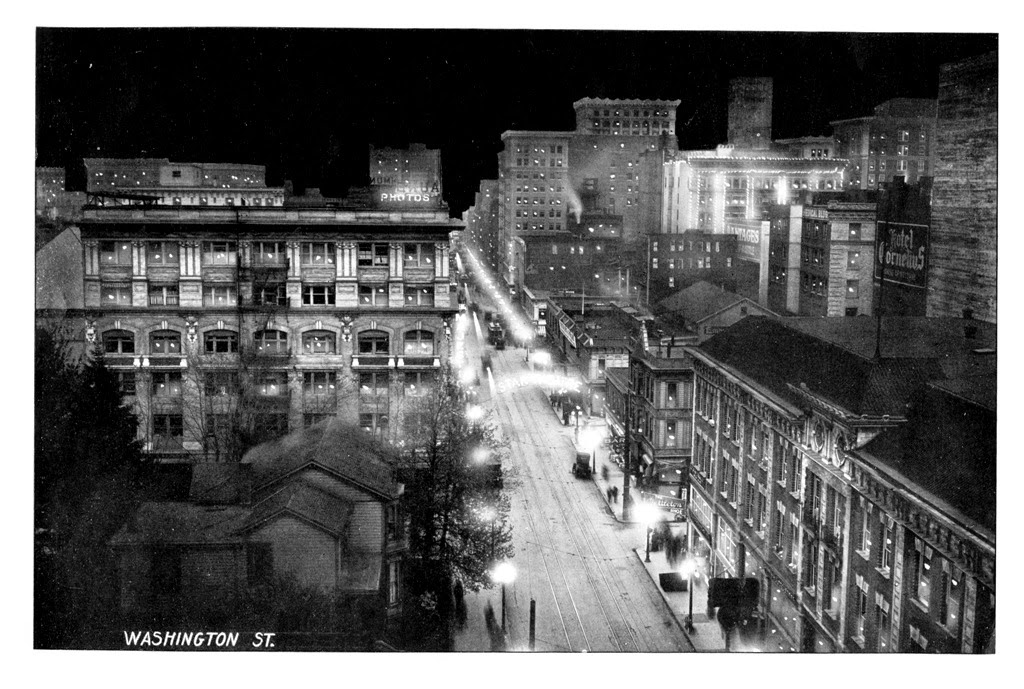 Washington, east from Tenth.  The houses in the foreground were soon be replaced by the Pittock Block.  The large structure behind them is the Columbia Building (1905).  It would be demolished in 1972 for O'Bryant Square.  To the immediate right is the Selling-Hirsch building.  The Portland Equal Suffrage League occupied a space inside.  It was torn down in 1971 for a surface parking lot that is today ringed by food carts. 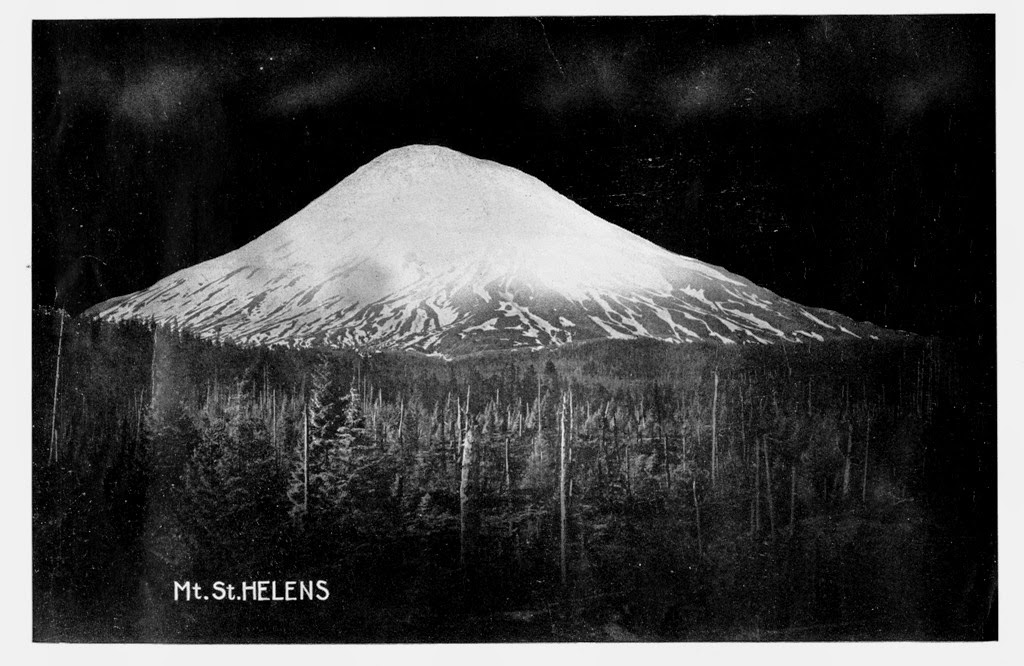 Mt St Helens to the north.


The next year was 1914. Portland was to get  brighter still.  For a little while. 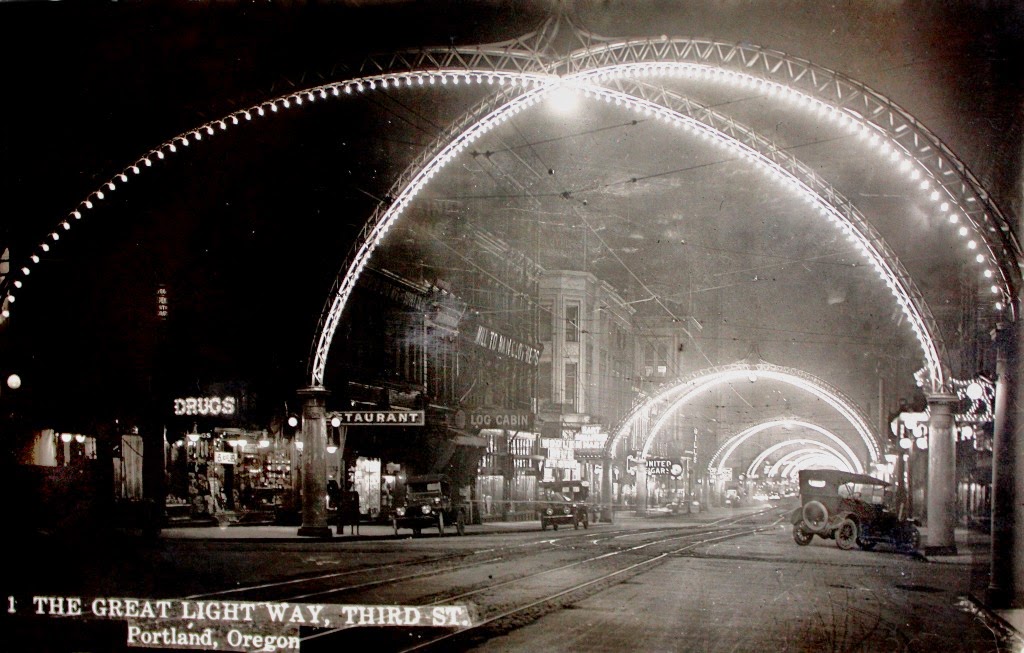