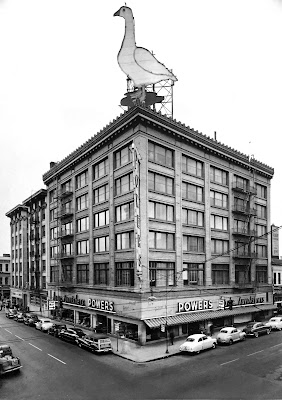 The Powers Furniture Company goose sign atop their flagship store at Third and Yamhill.  Fifty feet high and weighing 7,000 pounds, it was a downtown landmark.   Similar but smaller versions were on East Burnside over the building that would later be home to Hippo Hardware, and, most appropriately, in Goose Hollow on Jefferson Street.

Powers opened their main store at Third and Yamhill in 1911 in what is known today as the Director Building.  By 1914 large incandescent lit letters spelled out P O W E R S, oriented both east and west, from its roof.

The goose sign replaced the lit letters sometime after 1928. It survived the merger with Pacific Department stores and the subsequent re-branding as Pacific Powers in 1955.  It remained on the roof after the store's purchase by Director’s Furniture in 1957.

The sign was sold at the Zoomsi charitable auction in 1963, but was not claimed  by the winning bidder.  On January17 1964 it suffered significant structural damage in a wind storm.  It was purchased and removed by Harvey Dick, of Hoyt Hotel fame, on February 23 1964.

Harvey Dick wanted to mount the sign atop his Roaring Twenties nightclub annex of Hoyt that was due to open the following year.  In classic Harvey Dick style, he planned to add a red blinking eye to it.

The sign disappears from history at that point.  Unlike many of Harvey Dick’s acquisitions for his Portland Xanadu, the goose seems to not to have had a second life there, or at least appears in no photographs that I have ever seen.

Can anyone solve the mystery of Portland’s missing fifty foot tall goose?