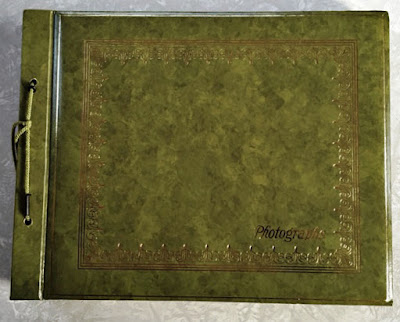 By way of happenstance, luck and generosity, an old photo album recently came into my possession.   Between its nondescript covers is something extraordinary: sixty four pages of 3.5 x 5 black and white snapshots, documenting Portland street scenes from the mid 1960s to 1976.

Some pictures are near duplicates, others are included without regard to quality.  Handwritten notes on the inside cover correlate to absent negatives.  Most of the dates provided are approximates.  The album's function appears to be that of an negative contact index sheet, but with larger images.

The unnamed photographer was interested in recording Portland's built environment.  People appear, but they are incidental, seldom the subject.  It is the project of someone to whom a sense of place held great importance.

I believe, with a high degree of confidence, that the album is the work of Harvey Maddux, author of the book Camera Around Portland (1979, Maddux Engraving company). 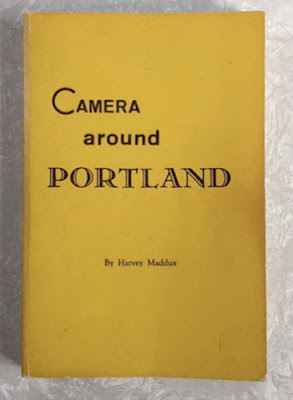 In equal parts memoir, a paean to the good old days, and a celebration of Portland, the book features Maddux's contemporary views, augmented by images from the Oregon Historical Society.  Subjects such as the Oregon Coast, Columbia River Gorge, and events such as the Columbus Day Storm, the Trail Blazer's championship celebration and the eruption of Mt St Helens (a year after the book's copyright date) are also covered.  Significant portions of the book are dedicated to street scenes and individual buildings, traits it shares with the photo album.  In both, Maddux shows a preference for the old, but also documents the new.  The photographic style in the book and album are very similar.  While there are no exact matches between the two, numerous examples are very close. 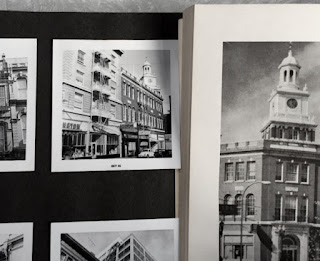 The photo album (left) and Camera around Portland (right).


Harvey Maddux was born in 1902.  His childhood was spent at his family's homestead, twelve mile east of Tillamook, as related in his first book, Homestead on the Trask.  He arrived in Portland in April 1926, apprenticing with the Oregonian as a photo engraver.

"Amidst the tall buildings on the west side, I felt like a mouse in a haystack.  Right off the bat I got so turned around I was an hour finding my way home.  To keep from getting lost after that, I had to establish a point from which I could venture and still keep my bearings.  That point was the arches on Third Avenue, visible day or night, all the way from the river up to Thirteenth". -Harvey Maddux, Camera Around Portland

Maddux thrived in Portland and adopted the city as his own.  Over the next four decades he worked at a number of firms downtown.  By the mid 1960s, changes caused by urban renewal, new development and freeway construction, brought fears that the essence of the Portland he knew was imperiled.

"Could a city loose its identity:  Could the "new" reach the point where it crowded the "old" out of existence?"

It was this concern that drove him to document the city's streetscape through photography.

"As out-of-town wealth began flowing into the city, with it came heavy pressure to reshape the town itself - with little if any regard for aesthetic values.  And this is where the rub began.  For a while it looked as if everybody got to see who could put up the highest building in the city.  At the same time, one after another familiar landmark was being destroyed.  Watching so many old establishments disappear from the scene disturbed me.  Pictures were one sure way to revive the memories; that is where I got the idea of putting together a book".

Maddux continued to reside in Portland until his death in 1995.

What follows are twenty selections from the photo album, taken between the mid 1960s and 1976.  A second selection will follow, later in February.  Click on the pictures for larger versions. 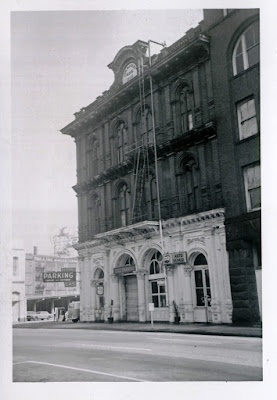 "Had not concerned citizens put up a hefty battle to save certain areas, very little of historical value would have remained". Harvey Maddux wrote in 1979.  Preservation efforts had yet to bear fruit in this mid 1960s view of the New Market Theater (1872), then home to the Civic Parking Company, viewed from SW Second and Ash.  It would be restored in 1983. 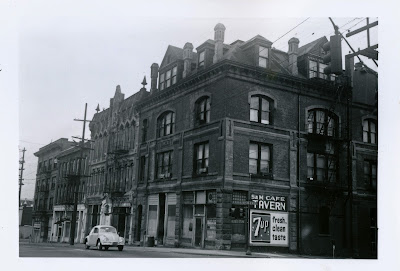 The buildings on the east side of SW 1st between Clay and Columbia however were  demolished in 1967, during the second phase of the South Auditorium Urban Renewal District. The Coer'd Alene building (1892) is on the corner.  Next door is the Spaulding Building (1883). 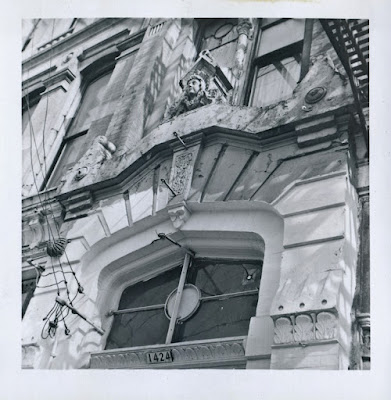 Detail of the Spaulding building.  William Hawkins III in The Grand Era of Portland Architecture said of the building, "Somehow, with its contrasting brick and stone, the overall design of the building was a delight." 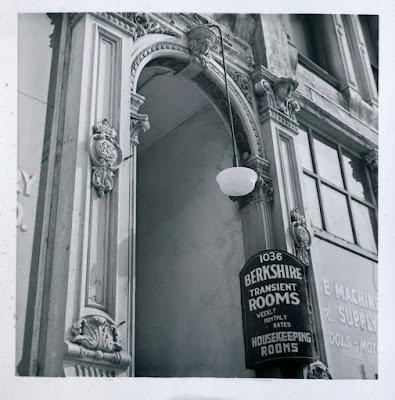 The Smith and Watson building (1883) was on the north east corner of SW First and Main.  Seen here circa 1965, it was home to the Berkshire, offering transient and housekeeping rooms.  It was demolished in 1974 for Portland's World Trade Center complex.  Today, some of its pilasters and arches are free standing in Ankeny Plaza. 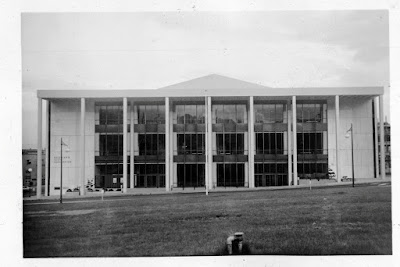 The Portland Civic Auditorium, circa 1969, during the short period of time between the demolition of the buildings that faced it across SW 3rd Avenue, and the installation of the Forecourt (now Ira Keller) fountain in 1970. 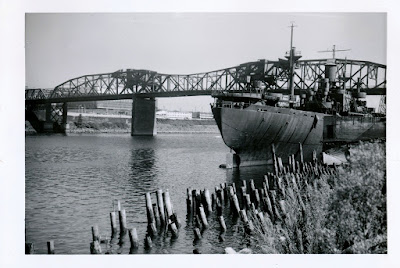 A World War II era liberty ship from the reserve fleet, docked in preparation for scrapping, north of the Broadway bridge, circa 1970.  Throughout the 1960s many liberty ships were scrapped within a few miles of where they were built. 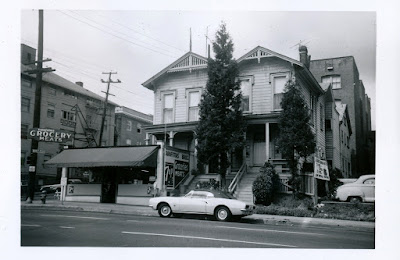 Karafotias Brothers grocery store on the south east corner of SW 11th and Columbia, circa 1970.  One of two markets owned by members of that family, the other being at #940 SW Hall.  The location is now the parking beside the Plaid Pantry, across SW 11th from the Museum Place apartments. 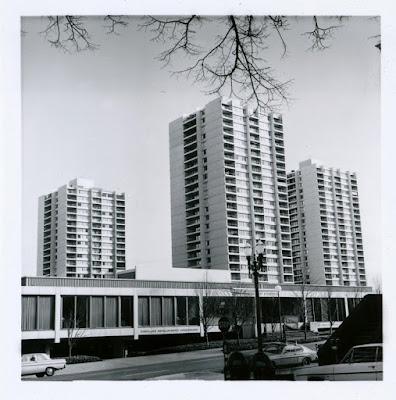 Low rise offices of the Portland Development Commission and Pope and Talbot on the east side of SW 4th between Mill and the pedestrian walkway aligned with Montgomery, circa 1974.  The complex was part of Portland Center, whose apartment buildings can be seen in the background.  The Cyan PDX apartments were later built on the site. 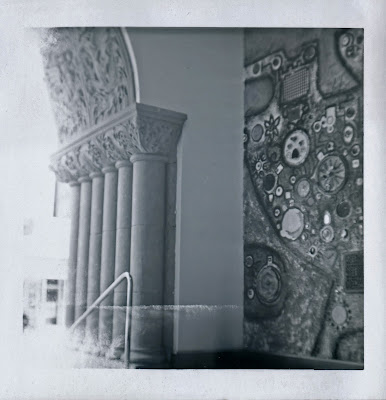 Artwork inside one of the entrances to the Dekum building (1892) at SW 3rd and Washington, circa 1965. 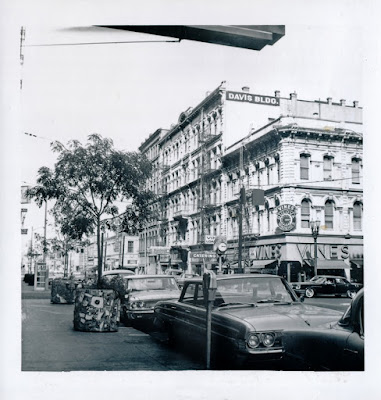 SW 3rd looking north, circa 1965, in front of the Dekum building.  The Council block (1883), the Davis (former Abington) building (1886) and the McKay building are visible across Third and Washington.  Today the site of the buildings is the location of a half parking / food cart lot.

Mid 1960s sidewalks were more crowded with street furniture (clocks, fountains, parking meters, phone booths etc).  There were much less trees.  This view, with its flamboyant planters, has both. 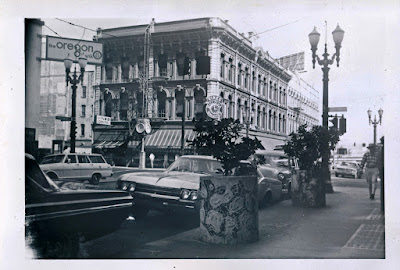 Another view from outside the Dekum building toward the Council Block, this time down SW Washington, across 3rd, circa 1968.  The neighboring Davis / Abington building had been torn down in 1967.

The Council Block stood until 1976.  The building hand not been designated a historic landmark due to a backlog of applications.  Unlike prior parking lot tear downs, its demolition was challenged by the Portland Planning Commission, an official of which noted the the outcome would show if "the city meant business with its pledge to preserve and revitalize downtown".  The commission's efforts were not successful. 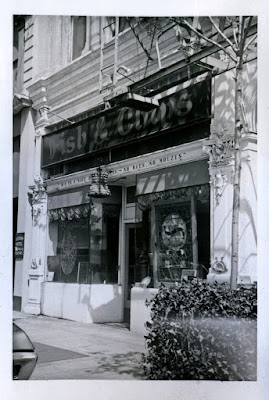 The Council Block was next door to the Waldo Block (still existent) on SW Washington.  Its first floor was home to the Elephant and Castle pub and restaurant.  Mama Mia Trattoria now occupies the space.  This 1970 view shows a portion of the Elephant and Castle.  The slogan "R's is a nice house R's is - No rats, no mouzes" is adapted from an old English music hall song. 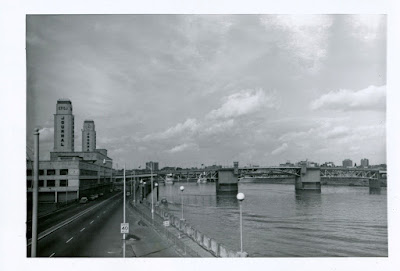 Harbor Drive freeway and the Oregon Journal building, formerly the Portland Public Market (1933), taken in 1969 from the Hawthorne bridge.  That year it would be demolished to enlarge Harbor Drive, which would in turn be removed in 1974 to create Waterfront Park. 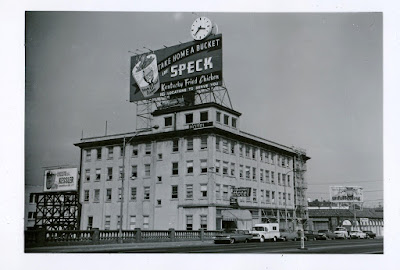 The Bridgeport Hotel at the east end of the Burnside Bridge, circa 1970.  The building would survive, albeit in derelict condition, into the early 1990s.  The large sign faced the White Stag sign directly across the river.  Over the years it featured numerous incarnations. 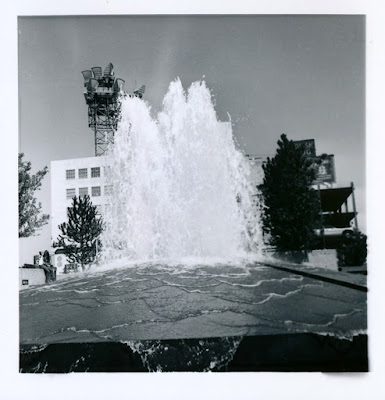 The fountain in O'Bryant Square, circa 1974, long before O'Bryant Square's reputation as "Paranoid Park."  Two years later, the square received a national design award from the US Department of Housing and Urban Development.  The open frame structure in the background is a Pigeon Hole Parking facility, which was accessed by elevators at SW Stark and Park. 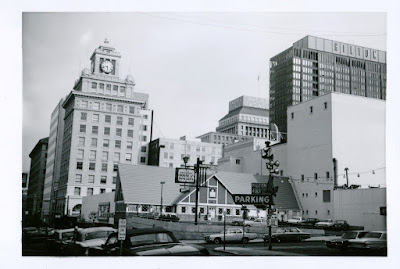 The International House of Pancakes at SW Yamhill and Park, circa 1970.  The block is now the site of the Fox Tower.  Note the sign for another Pigeon Hole parking structure which was located across the street, where Director Park is today. 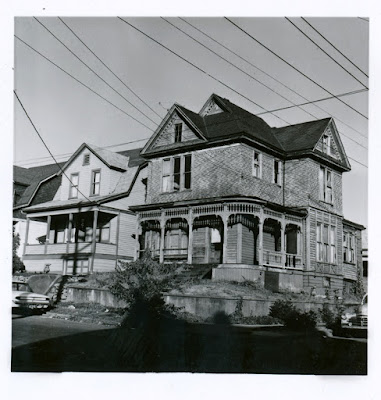 Houses at the north east corner of SE 33rd and Yamhill, November 4 1974.  Both still exist, but are now obscured from the street by trees. 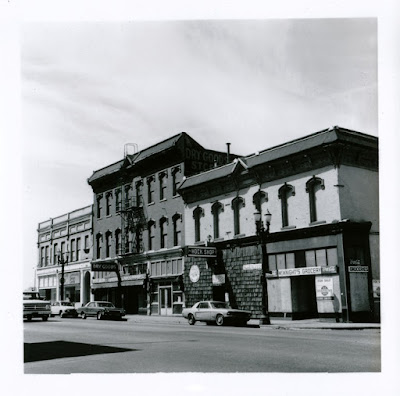 The Hock Shop, a topless bar, and the closed McKnight's Grocery inhabit the West's Block (1883) at SE Grand and Alder.  The building, now restored, is the home of the Architectural Heritage Center.  September 4 1976. 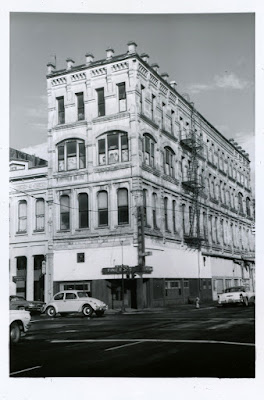 The Van Renssalear building (1878, upper floors 1884) on the corner of SW 1st and Yamhill, circa 1969.  The Harbor Club on the first floor was a well known Portland gay and lesbian bar in the 1950s.  It closed in 1964 but the sign remained five years later.  Paddy's Bar and Grill is in the location today. 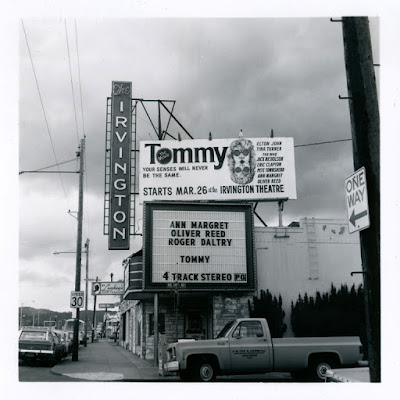 Tommy was playing at the Irvington Theater at NE Broadway and 14th in May 1975.

Part 2 of the Green Album will appear in February.