A Spinster on the Trail

In the 1890s it was said that the trio of great cities on the west coast; , and , were as three sisters, a debutante, a tart and a spinster.

, wealthy with decades of mining, shipping and railroad fortunes was the debutante. , the jump-off point to the gold rush, exploding from a boomtown into a city with raucous unrestrained energy, was the tart. , with its staid, frugal mercantile origins and aspirations was the spinster.

From Nancy Boggs’s gaudy pleasure barge anchored in the middle of the Willamette River in the 1880s (conveniently outside the jurisdictions of the cities of Portland and East Portland) to today’s shopping center at NE Killingsworth and Highway 30,
which gives new meaning to the term strip mall, Portland has always been home to risqué commerce.

On the old North End, on Fourth above Burnside, brothels once operated openly in buildings owned by the city’s Trinity Church-going elite. For all of its tree-lined respectability, was still a port city, with all the free form debauchery that implied. What is surprising is how close under the surface it sometimes rested...

The Lewis and Clark Exposition of 1905, on the shores of long vanished Guilds Lake. "The Trail," the fairs midway, can be seen to the left, leading to the "Bridge of Nations" and the US Government Building on the island. (Click on pictures to expand.)
-"The Souvenir View Book of the Lewis & Clark Exposition and Oriental Fair." 1905.

Portland put her best foot forward with the 1905 "Lewis & Clark Centennial and American Pacific Exposition and Oriental Fair Exposition", a celebration of the settlement of the west and a the approach of a trans-Pacific future.

An ephemeral gleaming white city arose on the banks of northwest of downtown. Row upon row of pavilions in the “Spanish Renaissance” style promoted the latest advancements of industry and agriculture as well as marvels from Europe and . States such as , , , and had their own buildings. Forestry was represented by the world’s largest log cabin, while on an island in the middle of the lake, accessible by the stood the U. S. Government building.

And then there was The Trail… 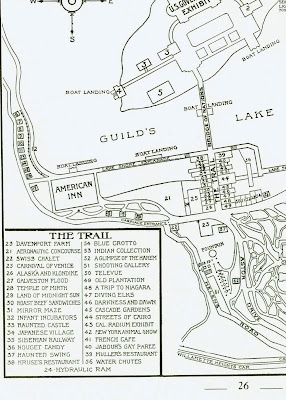 A map of the west end of the Exposition, and The Trail, from "The Great Extravaganza, Portland and the Lewis & Clark Exposition" by Carl Abbott.

The Trail was the Expositions midway...

“Where everything that is amusing and grotesque, hilarious, foolish novel and absurd is foisted and intoned, where all that ingenuity can devise, skill project or daring accomplish is brought for the diversion of a summers day”
-Richard Barry, in "The Souvenir View Book of the Lewis & Clark Exposition and Oriental Fair" from 1905.

On the Trail, attractions such as “The Temple of Mirth,” “Gay Paree,” “A Trip to Siberia,” “Trixie the Educated Horse,” “The Haunted Swing,” “The Land of the Midnight Sun,” and “The Entrance to Cairo” fronted a boardwalk where...

“…Umatilla Indians, Turks and Orientals with the vast crowds which throng the busy Trail. Arabs resplendent in their eastern costumes, bull fighters and dancing girls recall the merry days of the original Midway.”
-From “Glimpses of the Lewis & Clark Exposition and the Golden West” 1905. 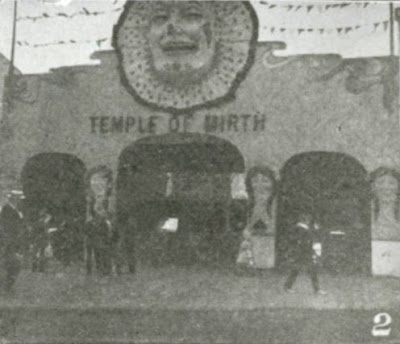 The "Temple of Mirth" on The Trail might look vaguely familiar to anyone who has attended a show at the Crystal Ballroom.

Barkers, “Ballyhoos” (street performers) and “Speilers” competed for the attention of the fairgoers, as did numerous restaurants.

“The boisterous noise of brass music makes a trip through the Trail a succession of discordant crashes which distract attention from many a less presuming attraction behind high walls. Scenic and electrical amusements abound, trained animals there are, wonderful things displayed and frightful happenings enacted, but the dances are engrossing things that are offered and most engage the attention of visitors.”
-The Souvenir View Book of the Lewis & Clark Exposition and Oriental Fair from 1905. 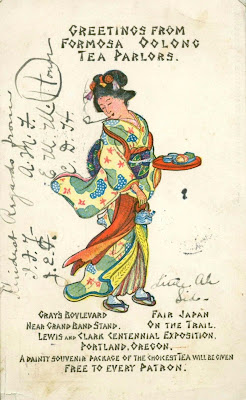 “A dainty souvenir package of the choicest tea will be given free to every patron.” is stated in this postcard from the Formosa Oolong Tea Parlors “On the trail”
The card is post marked Portland Oregon 1905, and is sent to a Dr. George Bral in Alnwick, Northhumberland, England.

For one summer, the Trail was the Exposition's and ’s carnival of wonders. Then it was gone. 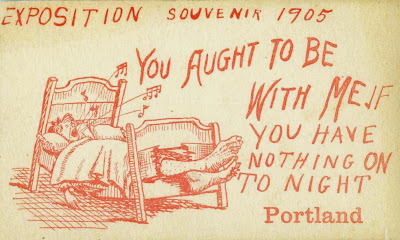 “You aught to be with me if you have nothing on tonight” – Exposition Souvenir 1905 .

They are somewhat cryptic, but have strong implications. One gets the impression that they said even more to those conversant in the argot of the 1905 player… 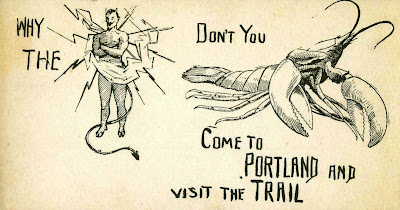 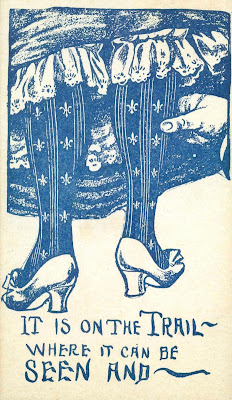 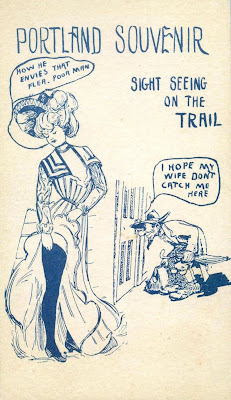 “How he envies that flea. Poor man.” -Sight Seeing on the Trail. 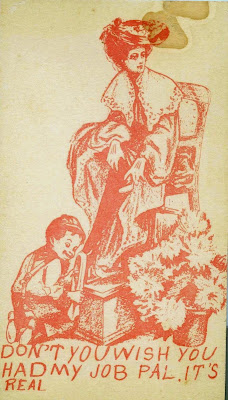 “Don’t you wish you had my job pal? Its real..” declares this Alfred E Newmanesque scamp. 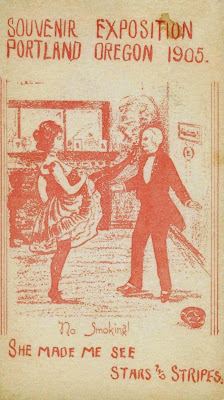 No smoking regulations were strictly enforced.

“It is impossible to check the books on the bars and bawdy houses after three-quarters of a century, but we can assess the overall impact of the Lewis and Clark Fair on the economy.”
-“The Great Extravaganza, and the Lewis and Clark Exposition” by Carl Abbott.

With 540,000 visitors from , 640,000 from the rest of and and 408,000 from the rest of the and (the figures are from -“The Great Extravaganza, and the Lewis and Clark Exposition” by Carl Abbott.) it is easy to surmise that things were lively on the old North End.
The six postcards suggest however that some form bawdy commerce was going on in the gleaming white city itself.

The contradiction, between the ideal and the profane, might be as familiar to Portlanders of today as it was in 1905. 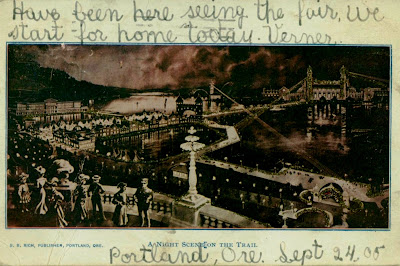 The Trail (buildings to the left, leading to the Bridge of Nations and US Government building, on the island) at night. A postcard mailed from Portland, September 24, 1905. 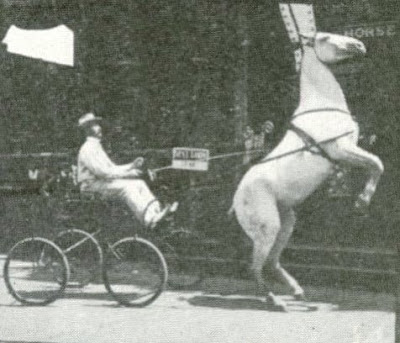 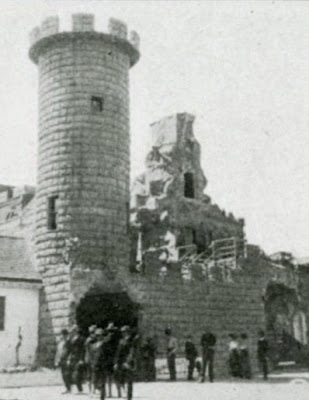 The "Haunted Castle" on The Trail. 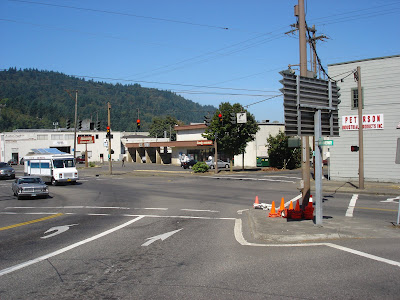 The map on page 22 of "The Great Extravaganza, Portland and the Lewis & Clark Exposition" by Carl Abbot, and some help from Google Earth makes it possible to find where The Trail began. North from the intersection of NW Twenty Ninth, NW Nicolai Street (then part of St. Helens Road) and NW Wardway Street, The Trail ran at an angle from the right of the Handy Foodmart entrance, diverging north and west from NW Twenty Ninth. 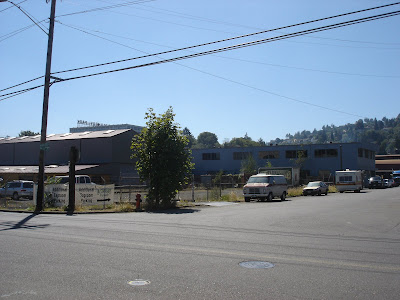 Approximately the same location, on The Trail, in 1905.

David Parry- who after defeating me in a bruising battle on ebay for the Trail postcards, still allowed me to scan them for this post.

Chet Orloff- for the anecdote about the Three Sisters in his great Portland History class at Portland State University, which I took a few years ago. It started me on the trail to Portland’s past. 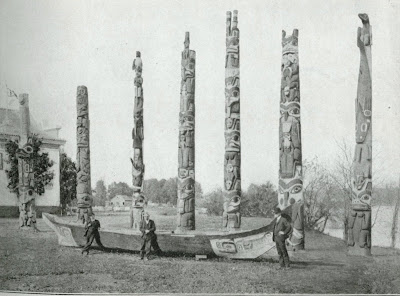 In “Glimpses of the Lewis and Clark Exposition and the Golden West” these totem poles are described as “The finest collection in existence, arranged in semi-circle in front of the Alaskan wing of . Made by Indians from the … Very rare and valuable curiosities.”

So, what happened to them? If anyone knows the story, contact me at cafeunknown@comcast.net

I think the "Lobster" is a Crawdad but it still doesn't make sense. This has been driving me nuts all week. I really love your blog.

This is such a great post! I really enjoy your blog.

Fantastic entry! Some mysterious documenting of high libido on the ol' Trail...what could be better?

The original totem poles that have survived are now conserved and exhibited in Totem Hall at the Sitka national Historic Park visitor center in Alaska.


The National Park Service website site regarding the totems is here:

and there is a virtual tour called the "virtual carved history walk' that showcases many of the carvings here:

Thank you for the wonderful blog posts, I find them fascinating. -NS

I HAVE SEVERAL WOODEN POSTCARDS FROM THE 1905 EXPOSITION. DOES ANYONE KNOW HOW I WOULD FIND A FAIR MARKET VALUE FOR SELLING THESE? PLEASE EMAIL ME IF YOU DO OR NEED MORE INFO ...KITTYCAT10007@YAHOO.COM

Great site, Dan. Was interested in the House of Mirth "Trail" attraction since our founder Abbot Kinney brought this and other attractions down to Venice-of-America from the Portland Fair. They opened here in early 1906. Am interested in finding more pictures of these.
Todd von Hoffmann
Venice Heritage Foundation
bdbooks@aol.com

I'm guessing that it's "Why the devil don't you scuttle ..."

Loved this post and enjoy reading all of them :)