It's been too long between posts. A lot is going on and it's easier to look at microfilm when it is gray and wet outside, but to be honest, a long gap becomes self-perpetuating. The story I have been working on still needs more research. It will be finished, but it might be two more weeks. The gap grows larger, more intimidating by the minute. Better then to just jump back in.

Sometimes you have to leave home in order to see it better.
Friday I went to The Dalles. 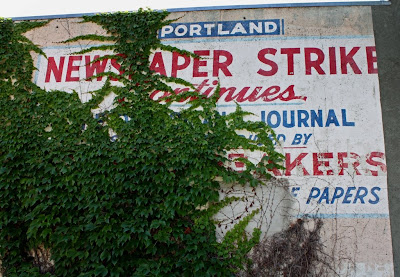 On Third Street I came across an old billboard on the side of a building. Although half covered with ivy, it was clear that it referred to Portland's newspaper strike that began in 1959 against both the Oregonian and Oregon Journal and ended nearly five years later after the National Labor Relations Board ruled it illegal.

From what can be seen, it appears to say the Oregon Journal was being put together by strikebreakers. Perhaps it advertises a locally produced alternative or promotes The Reporter, the weekly newspaper that was put out by striking journalists in competition with the Oregonian and the Journal.

The end of the strike saw the demise of unions at Portland's two large daily papers. It was also the beginning of the end for the Oregon Journal whose circulation never regained pre-strike levels. Today the third longest strike in newspaper history is largely forgotten. To find a tangible remnant forty four years later in The Dalles is surprising, to say the least.


The Dalles was incorporated in 1857, just six years after Portland, but as it never reached the larger city's level of commercial activity, more remains from its early decades. One building in particular grabbed my attention: 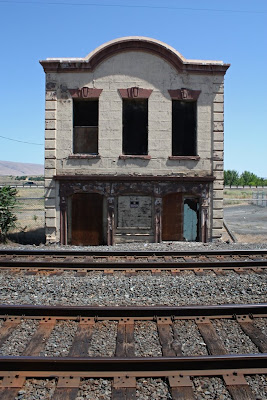 Cut off from the rest of downtown by the Union Pacific tracks and from the Columbia River by I-84, the Waldron Drugstore, built in 1867, leads a precarious existence in no man's land.

After the Flood of 1880, First Street, which the building faced, was raised twelve feet, making the entrance below street level. Over time, the Oregon Railway & Navigation Company's right of way built up, so that the first six or so feet of the buildings front is buried by 129 years of accumulated ballast. Historic importance aside (Walt Whitman once stayed there when it was a boarding house) with no easy road access its prospects appear dim.


Despite its forlorn condition there is evidence of care. Almost certainly someone restored the billboard advertising passage to Portland via the Regulator Line. It is a vestige of The Dalles, Portland and Astoria Navigation Company, "the Regulator Line" established in the early 1890s as an alternative to what had become a rail only monopoly along the upper Columbia River. When a canal was opened around the Upper Cascades in 1896, the lines steamboats were able to pass from The Dalles to Portland, uninterrupted by the need to portage around the rapids.

The steamboat "Regulator" of The Dalles, Portland and Astoria Navigation Company on the Columbia. 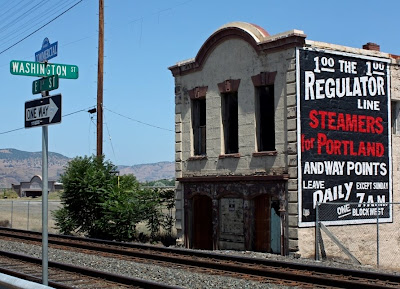 The Waldron Drugstore with the Gateway underpass in the distance.


The fact the nearby Gateway underpass mirrors the roof line on the Waldron Drugstore shows some appreciation for the venerable structure. The underpass, built in 2003, reconnects the downtown to the river by allowing passage beneath I-84 (think of Portland's old Harbor Drive writ huge).


As an example of the earliest cast-iron buildings that replaced its white-washed flat-fronted frontier downtown, Portland has nothing like the Waldron Drugstore, but it did once and could so again.

On Front, next to the ornate Fecheimer & White Building, is Portland's earliest commercial structure, the Hallock & McMillan Building. When it was built in 1857 James Buchanan was President, Oregon had yet to become a state and the Union was whole. 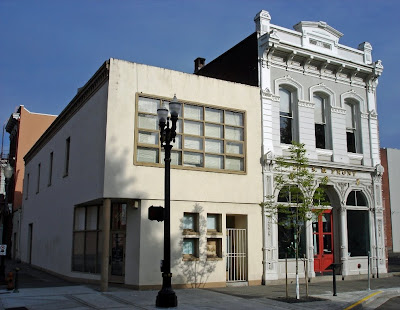 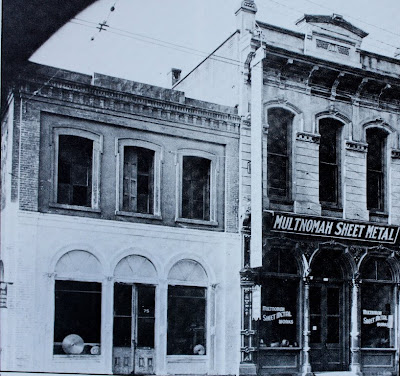 The Hallock & McMillan and Fechheimer & White buildings in 2008 and the early 1940s (from The Grand Era of Cast-Iron Architecture in Portland Oregon by William John Hawkins III).

The cast-iron facade on the Hallock & McMillan building, like that of the Waldron Drugstore was modest in scale but revolutionary in relation to its wooden pioneer neighbors. It was replaced in a 1940s re-model which might have saved the building from the decade and a half of demolitions in the area that followed. 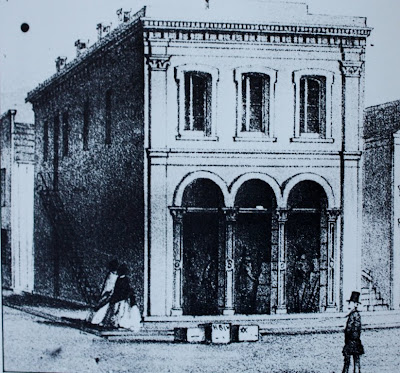 An 1859 view of the Hallock & McMillan Building.


Its neighbor on the other side of the Fecheimer & White building was not so lucky. The Ladd Building of 1853 was the first cast-iron fronted building in Portland. It was demolished in 1940, as the momentum for Front Avenue "improvements" was gaining ground. Its iron work was very similar to what can be seen on the Waldron Drugstore today. 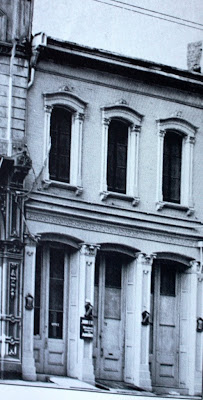 The Ladd Building of 1853 (and the edge of the Fecheimer & White Building). 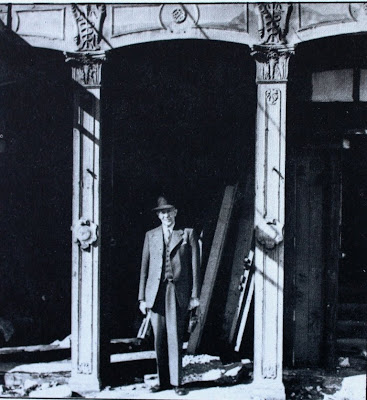 The cast-iron of the Ladd Building, 1940, during demolition. 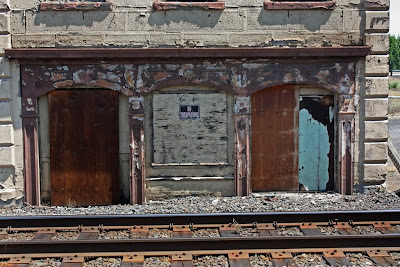 The half buried cast-iron of the Waldron Drugstore, The Dalles Oregon, July 3 2009.


In The Dalles, cast-iron buildings never approached the scope, scale and unity of what would later be built in Portland, but the material was utilized for the same reasons. Cast-iron was a fast way to build a substantial city on the frontier which lacked the large number of artisans needed to create the stonework the iron was sought to replicate. Strong, modular and manufactured in kit form, what is often looked at as old-fashioned was in fact modern. 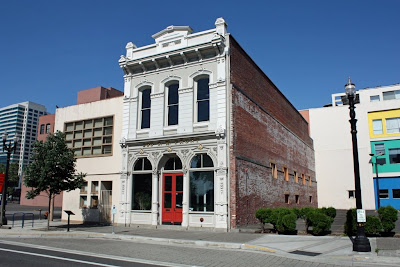 
The blank face of the Hallock & McMillan building and the lot adjoining the Fecheimer & White Building are opportunities should someone choose to revive a portion of Portland's early street-scape. Design guidelines proposed for the Skidmore Oldtown National Historic District could incentivise portions of the areas restoration through the re-introduction of stored cast-iron facades or fiberglass restoration.

In the meanwhile, a visit to The Dalles can be time well spent.

The Hollywood neighborhood- almost a city within a city. The Hollywood Theatre, Poor Richard's and the Pagoda, Hollywood has a look and feel all of its own. With the recent demolition of the Pagoda Restaurant, it has less.

No one could call the Pagoda culturally significant or hugely historic, but that did not make it any less a landmark. When Key Bank purchased the site for a new bank branch, neighborhood groups and fans of mid-century Americana hoped that perhaps at least the pagoda element of the restaurant could be saved and incorporated into the new building. Key Bank's commitment to neighborhood sentiment was made clear last week when the Pagoda was knocked down. Portland is poorer for it.

What makes a landmark? History, aesthetic significance, local sentiment? On Sunday July 12 at 6:30am, early risers can tune into Outlook Portland on NW 32 when Rick Emerson hosts a discussion about Portland's architecture and landmarks with Brian Libby of Portland Architecture, John Chilson of Lost Oregon and yours truly.

We tie together a number of recent issues such as Memorial Coliseum, the Made in Oregon sign, a neon rose on John Yeon's Portland Visitors Information Center, recent and pending demolitions and the encroachment of the generic. If it is too early for you, the show will also appear on NW 32s youtube channel within the month.

Next up, cue Dave Brubeck's Take Five for Portland's big dreams on the New Frontier...

Can I ask, where did you get the information regarding Hallock & McMillan Building?

I will miss the pagoda building. was it also US bank that shut down and gutted the rose & raindrop?

Kevin-
The Hallock & McMillan info came from "The Grand Era of Cast-Iron Architecture in Portland" by William Hawkins, a great book that made me appreciate the fact that early Portland (especially from 1870-1890) was a very unique city of its time.

The book is out of print but still findable. A few months ago I saw a used copy at the Burnside Powell's for under $20 which was an amazing value.

I accidentally saw your post and it attracted me from the first few seconds, it was excellent, hope you have more successful posts. I like this post because it contains a lot of useful information to read, maybe everyone will like me.
jogos io gratis, cá koi mini, friv at school 2019, abcya 3

You are providing a post that is very useful for developing my knowledge and I learn more info from your blog.