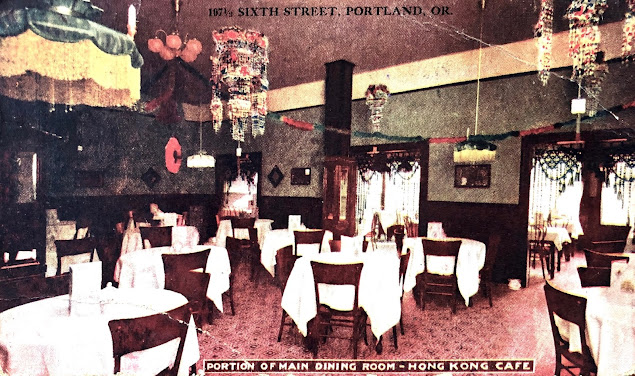 A postcard, postmarked May 25 1910.  The main dining room of the Hong Kong Cafe, located on the west side of Sixth street, between Washington and Stark.

White table cloths, wooden chairs and a patterned linoleum floor.  Modest decorations hint at the cuisine.  In the next room, windows look out above Sixth street.  Second floor locations were common with Chinese restaurants seeking to avoid the higher rents at street level.

The Hong Kong Cafe was opened by Lee Ling Sen, Lee Quin and Hoey Ching Cho on Saturday, November 27 1909.  Its business district location, well outside Chinatown, places it in the forefront of the Chinese restaurant boom that began in the years leading up to World War I.

Writing in the 1920s, G.H. Danton, a New York University professor on an academic exchange to Tsing Hua College in Peking (Beijing), explained: "The rapid increase in the number of Chinese restaurants, or "chop suey" parlors, is a rather striking fact in the life of America.  Fifteen years or so ago, there were just a few of these eating houses, confined to the China-towns of large cities.  About ten years back, their number began to increase, until now they may be found everywhere."  He added: "The reasons for their popularity are simple: they are clean, cheap, they offer a combination of exotic and artistic, and they are honestly and efficiently managed."

The cafe advertised "Delicious noodles and chop sueys made fresh daily," as well as "steaks and chops, oysters and shell fish of all varieties in season."  There were two kitchens, one for Chinese cuisine, the other American. A merchants lunch special was offered daily from 11am to 2 pm for 25 cents.  Unlike most Chinese restaurants at the time, the Hong Kong Cafe had a liquor license.  Want ads regularly sought experienced waitresses.  Long hours likely pushed turnover as Lee Quin had to pay a $25 fine for violating the 10-hour Female Labor law in October 1910. 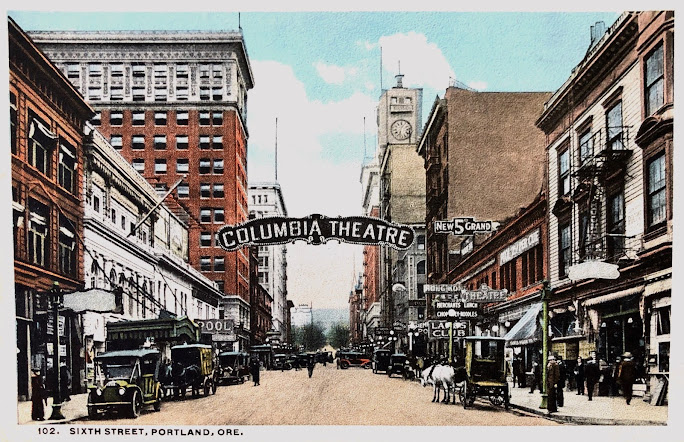 This view from 1913 places the Hong Kong Cafe in context on Sixth street.  Its sign can be seen mid-block on the right, advertising its merchant lunch, chop suey and noodles.  The two story building also held the Lamb's Club cafeteria, the Columbia billiard parlor and the New Grand Theater,  a five cent cinema that featured "High class motion pictures" such as Ranch Girl's Mistake, a "thrilling western story."  The clock tower of the Oregonian Building can be seen in the distance.

The Columbia Theatre's sign, lined with incandescent bulbs, hangs over the street.  Such signs were common in Portland in the first decades of the 20th century.  The last came down in 1948 when they were outlawed.   The theater itself is the white glazed-terracotta faced building with arches to the left.  Not visible are the 2,500 light bulbs inset into its facade to make it gleam at night.  The Columbia featured four-reel motion pictures such as Two Little Kittens (a drama), Her Royal Highness (comedy-drama), Death's Marathon (drama) and the Forgotten Latchkey (a comedy).  Admission was ten cents, twice that of the New Grand across the street.

The Hong Kong Cafe caught fire on December 1st 1919 at approximately 7:45 in the morning.  Captain William D. Heath of the Portland Fire Department suffered severe burns while attempting to shut off a gas meter that exploded.  One of the Chinese proprietors, referred to in the press as "Big Jim" narrowly escaped the burning building.   The business sustained $10,000 in damage which was covered by insurance.  The Lamb's Club cafeteria, Beck's Sweet Shop, the Columbia billiard parlor and the Oregon Hardware Store were also damaged.

The restaurant reopened on January 30 1920 but vanished from city directories and newspaper advertisements shortly thereafter.  In 1941 the entire west side of the block on Sixth, between Stark and Alder, was cleared for Equitable Building designed by Pietro Belluschi.

Note: To avoid anachronisms, locations are referred to by names they had at the time.  Sixth Street became Sixth Avenue in 1933.  Stark street is now SW Harvey Milk street.  The Equitable Building is now named the Commonwealth Building.

I noticed you spelled out "sixth" street. Was that spelling used at the time? I believe it is now "6th" not just for convenience, but officially.

Interesting question! A quick check in the Oregonian from 1933 (the year of the change from street to avenue) shows both having widespread use. Officially though is another thing. I will keep my eye out for this.

Cafe Unknown was at the top of my bookmarks list for a number of years. I look forward to your future content Dan.


That restaurant could exist today. It looks so modern. Happy to see you post!

Glad that Cafe is back!