Hung Over on Burnside 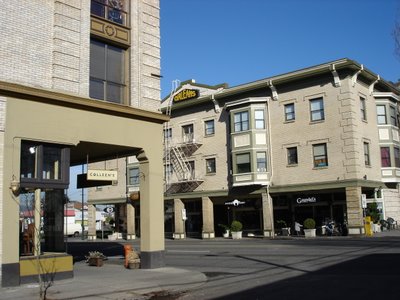 They were called the Arcades: Those buildings on East Burnside with their upper floors above the sidewalk.

A city ordinance in 1926 authorized the project. It soon ran into a controversy over how many buildings were to be “arcaded” and what compensation was to be given the owners. The issues were solved over the next two years and easements granted to the city “for the lifetime of the building(s)” in 1928.

In 1968 they were once again confronted by Burnside’s voracious appetite, as the Portland Chamber of Commerce proposed to widen the street into a six lane thoroughfare.
Nothing came of the idea. 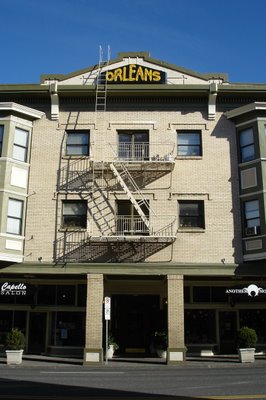 A better illustration of Jane Jacob’s maxim that a city needs old buildings to incubate businesses can hardly be found. (Columbia Sportswear was housed in one of the buildings in the early 1960s).

The Arcades are an architectural vernacular unique to a single street. Albeit accidentally, they are incredibly well suited to Portland’s wet climate. 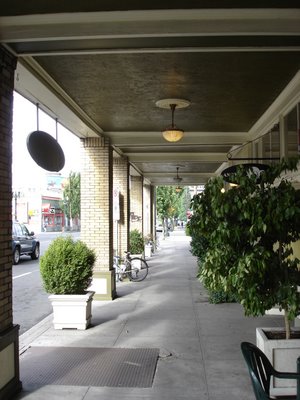 Amend Portland’s Building code to allow, even encourage, the construction of new “Arcades” on Burnside between MLK Blvd. and SE 11th.
Future Restaurants and bars could open out onto the covered sidewalks, blurring the boundary between indoors and outdoors. Space heaters would make outdoor dining possible for much of the year. The upper levels of the new buildings could be setback to allow patio space with full exposure to the sun and stars from above the walkways.

As new buildings gradually infilled between originals, commercial momentum generated by the new Burnside Bridgehead Development would continue east, with a unique streetscape from very local roots. If the Burnside / Couch couplet plan is adopted, the decrease in traffic would make the area even more attractive to street level activities.

Building on Burnside’s past, an “Arcade district” would expand upon the character of the old East Portland street, creating an area well adapted for year-round use.


A Tour of Portland Arcadia 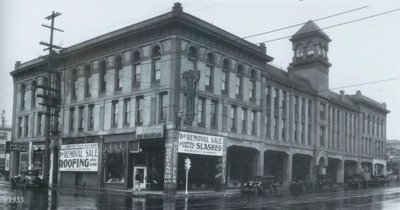 The largest and most impressive was the first to go. The Burkhard Building was on the north side of Burnside between Union and Grand. It was built 1894, four years after the City of East Portland was merged along with Albina into Portland. The building housed a large dance hall and other businesses. In 1908 the upper floors were made into a Hotel, which was renamed the Arcade Hotel after the street widening. It was torn down in 1934. Today it is the site of Convention Auto Wholesale.
Photo is from the book “Progressive Portland-On the Move” courtesy of the author, Donald R. Nelson. 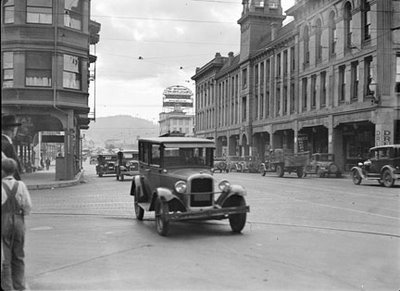 The Burkhard Building taken from the south side of Burnside, July 2nd 1931. The building to the left (now demolished) housed the New Arcade Apartments in the late 1920s-1930s.
Al Monner photograph, courtesy of Historic Photo Archive, http://www.historicphotoarchive.com/ 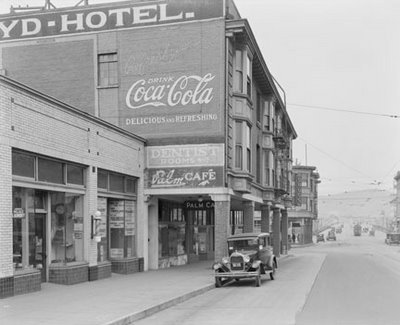 The Kern Building (demolished), March 13th 1930, at the southwest corner of Burnside & Grand (the New Arcade Apartments on the southwest corner are visible on the next block). The building housed the Lloyd Hotel, Coleman Drug and the Palm Café. Note the original curb line still visible after the widening project.
Al Monner photograph courtesy of Historic Photo Archive, http://www.historicphotoarchive.com/ 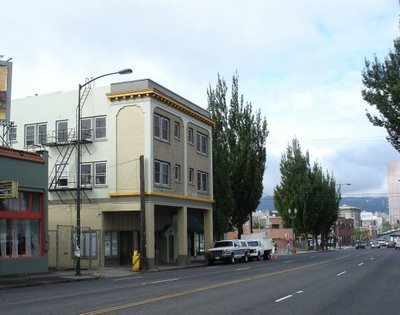 The building is currently vacant. Recently it was an IWW Union Hall and the Back to Back Cafe. 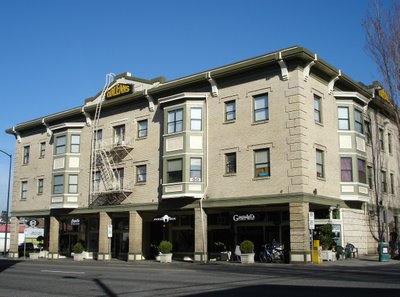 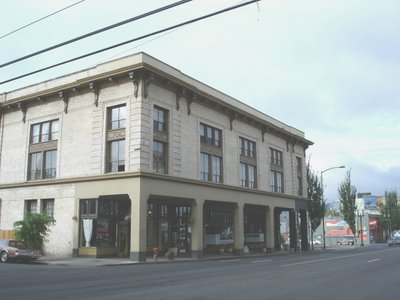 #722-738 E. Burnside was built in 1907 as the East Side Masonic Temple. The upper floors remained as the Washington Masonic Lodge until 1994.

Many business have been on the street level, including Columbia Sportswear (1960-1962).

Saw sharpeners, a union hall, a chemical supply company, electric contractors, a frame shop and the American Indian Craft Center (1969-1970), were located there at one time.

Currently the building is home to the Viscount Ballroom, Wax On Spa, Outlaws Bar and Grill and Wildcats. 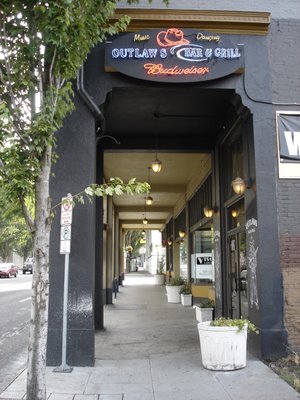 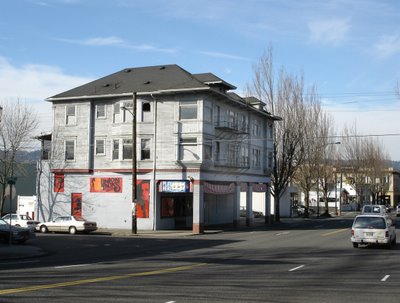 The building was built in 1911. The upper floors housed the Klein Apartments, which lost their name in 1927. Downstairs, Jacob Krichevsky, Grocery (1923) was followed by East Burnside Grocery (1924-1932). Petrol Heat Company, (Oil Burners) made a brief appearence in 1933 followed by a vacancy that lasted two years. 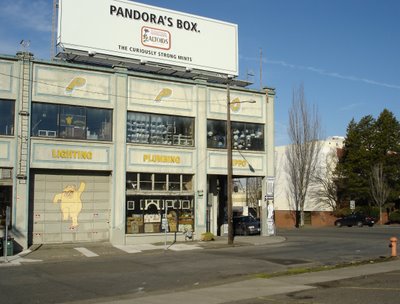 #1038-1040 East Burnside is the home of Hippo Hardware. It is the newest and furthest east of the Arcades.
It was built in 1920 as the East Burnside Garage: Accesories and Supplies, Painting, Repairing, Vulcanizing and Storage. 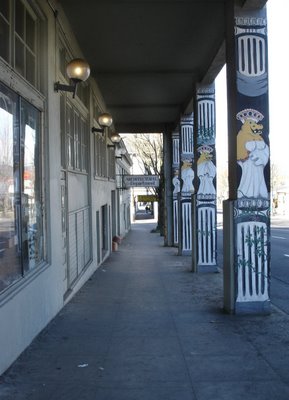 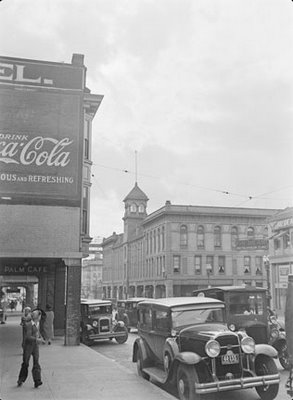 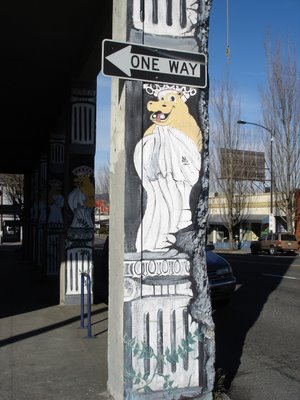 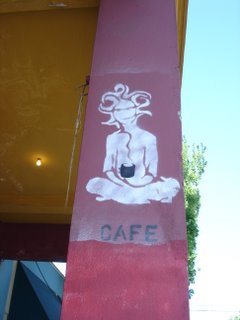 History, architectural and otherwise, regarding the east side of the Willamette, is sorely lacking. I was dead center in the locale of these arcade buildings Sunday afternoon - and was thinking to myself that the buildings looked to be of that 1900-1920 vintage, but that I didn't know a thing about them. Continue the good work, Dan!

There are two projects under way on E. Burnside that relate to the arcades. The first, under construction, is the Burnside Rocket, at 11th. It will have arcaded balconies, although the building itself doesn't overhang. At Portland Architecture is an article, and you can click on the pictures: http://chatterbox.typepad.com/
portlandarchitecture/
2005/08/burnside_rocket.html

The second one is proposed for the SW corner of 6th and E Burnside (currently a vacant lot). It is called bSIDE6. Here's a link: http://www.skyscrapercity.com/
showthread.php?t=399901&page=3 You'll have to scroll halfway through the page to see the two photos.

My wife Anne Richardson (Oregon Movies A to Z http://www.talltalestruetales.com/) alerted me to your blog. I am glad. Regarding Hung Over, have you ever been to Bern Switzerland? All of the old part of the city is arcaded. It is very nice for a walk on a rainy day. I'm surprised there wasn't more of it here. Thanks

Interesting post !!! i love to see it, when people need such type of site. which has great information about this topic... Great for new generation..
Thanks..
Pop Art

it's a great post for the some concern company which are those do it that work
This is possibly one of the most common ways without people even knowing.
thank for share it..
website for advertising
free marketing

I like to read it. Great effort by the author, really appreciative work.. I hope every one in future will adopt your information. Keep it and share more.......
men's style

I have read your blog thoroughly and got mind blowing information.... Please send me mail if your are going to improve something advance..
Thanks..
games shop

Great blog…Its really informative post to finding career I totally agree with you and Tim that blog is a great way to build a community Keep up the excellent work…
thanks for share me..

Hmm interesting way to express your ideas via sites I love to read it carefully. I refer you please join it and enhance your knowledge…..
Online Network Marketing Training

Interesting but not fully complete analyses of topic please you should improve your site information by reading different source of knowledge.

Hmm interesting way to express your ideas via sites I love to read it carefully. I refer you please join it and enhance your knowledge…..
Indian Walnut

This is really great. I like to be visiting your blog. Thanks very much for sharing all this great information here.
furniture store

Nice blog.. I am really impressed and you do an appreciative work.. thanks for sharing...
i like to read this topic. please share something more...
Thanks..
natural health products

Nice blog.. I am really impressed and you do an appreciative work.. thanks for sharing...
i like to read this topic. please share something more...
Thanks..
kids shop

It's really beautiful.. Really hard work by the author in this site ,i completely read this site it's really useful information ..thanks for share me...

The old hotel and infrastructure brings back history and a lot of memories. Long Island plumbers must have done simple jobs back then.

I am very happy to search out this web-site.I needed to thanks to your time for this excellent read!!
I definitely enjoying each little little bit of it and I have you bookmarked to check out new stuff you weblog post.

I like to read it. Great effort by the author, really appreciative work.. I hope every one in future will adopt your information. Keep it and share more.......
waste management london

Excellent article work. This is a large topis. I really appreciate it. To share all the details in this have great minds of thought.thanks.
alarm monitoring dallas

It's Great...!! I have got lot of information to read this topic..It's very essential me..
You have more information about this blog.. please share me more.. Thanks..
gator news

Interesting article, in fact, have increased heart failure and problems with the universally accepted definition has been diagnosed ... read many parts of the world.
I know to keep this information ...thanks !!! Rebrand Android apps

I read your post.. I have got lot of information to read this topic.. it is really essential for me and provide me great knowledge...thanks for sharing and your guidance...
web design for mobile

That's a great post....I'm very excited about this subject so excellent effort component and totally from this world
imagination....
android restaurant app

Great and informative post. My youth is reaally we need today. Yes, I will share more information with me I think. I can share and use.thanks for all these efforts ...Milk Snake Breeder

I really enjoy simply reading all of your weblogs.
Simply wanted to inform you that you have people like me who appreciate your work.
White Label Mobile Apps

Thanks for sharing this new, advance information.. It's really amazing and give me a lot of information .. Please share me more.. it's really good. I hope you have more information about this article.. .. Thanks..!!!!!
Build Day Spa Mobile App

Nice blog.. very nice to know about this topic... Thank you so much for posting this great article,
I am so interested on what I read, good and useful content.
Thanks for share me that nice post.
invertebrate breeders

I can't believe...! A lot of information to read this topic. Information on the success of the really big business. Thanks for this effort.
garage door torsion spring replacement el dorado hills ca

Good job! This is a excellent informative work. I am sharing this information to our friends it is also useful for me and i am so interested about this. Still I like this today. Thanks for sharing ,,
Led Signs

Good job! This is a excellent informative work. I am sharing this information to our friends it is also useful for me and i am so interested about this. Still I like this today. Thanks for sharing ,,
Led Signs

Great post, you have pointed out some fantastic points, I as well believe this is a very excellent website..
thanks
garage door off track ca

This is good stuff here. ... Read this another really great information on their own sites, and enjoy. definitely come make it again. Thank you very much.
affordable accessories

This is an old building and could use some sort of protection against burglary. Back home, the older the buildings, the more it need some sort of doors with crimsafe in perth. Thanks for sharing! Nice article!

Naturally melt down the excessive fat without affecting your muscle mass.
http://www.phenqreview.com.au/

PhenQ Reviews
Make the fat storage away from the body.
Supports to maintain the perfect body weight in which you look stunning.
http://www.phenqreview.com.au/index.php/phenq-reviews/

10 Diet Myths That Circulating Around Us since Our Birth
When it comes to weight loss, everyone seems to have some advice. But how do you separate fact from fiction?
http://www.ehealthharmony.com/2016/03/08/diet-myths-circulating-around-us/

The article attracted me and my friends to feel the same way, we will continue to follow your posts, try to post better articles, wish you success. I do not feel sorry for taking the time to read this post, it is really nice and useful to me, thanks for posting it.
jogos io gratis, cá koi mini, friv at school 2019, abcya 3