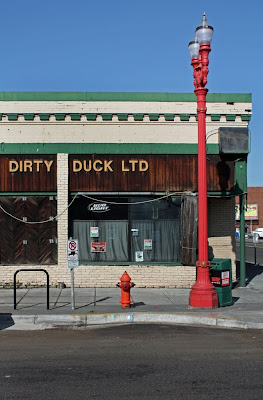 It might be hard to get worked up about preserving the Kiernan Building (1916), aka the Dirty Duck, when a treasure such as the Morris Marks House dire status is still unresolved. But if only masterpieces are saved, what remains is history skewed away from everyday life.

The Kiernan Building, on the corner of NW Third and Glisan, was recently approved for demolition by the city council to accommodate a new three to for story for the Blanchet House. The building is listed on the National Register of Historic Palaces as a contributing structure in the New Chinatown / Japantown Historic District, but it is part of a street scape whose history reveals a complexity beyond the simplification of Portland's "town" designations.

The areas proximity to Union Station made it an early gateway to downtown for travelers. Industry and labor, to and from the forests and docks followed as did Japanese American merchants and later Chinese Americans displaced from Portland's original Chinatown along Second. During World War II African American shipyard workers lived at the Royal Palm Hotel on Third and Flanders. The Blanchet House and the Union Gospel Mission (in the former New Grand Central Hotel) established a decades long tradition of benevolence which continues to this day.

The Royal Palm Hotel on Third and Flanders.

"History is inseparable from place. Its a complicated world, but when defined plainly, place is the stuff of memories, or all the sensory delights and fears connected to particular locations in time." -Matthew Klingle, from Emerald City, an Environmental History of Seattle.

When completed in 1916, the Kiernan Building was a typical light industrial structure. It housed Roy Chekezoff & Sons Confectionery and the Western Machine Works as well as two small store fronts. Other business followed, such as Portland Welder's Supply and the Western Union Telegraph Company. 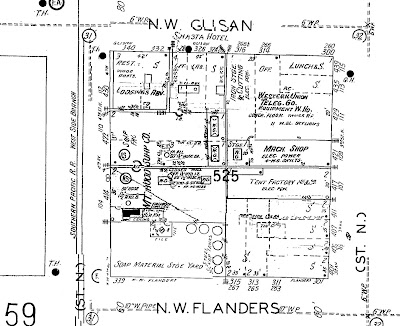 Block #25 in 1950. The Kiernan Building, at the top right, houses Western Union, a machine shop and restaurant. Next door is a tent factory, Pike Tent and Awning. Note the Shasta Hotel on Glisan (now a vacant lot) whose name hearkens back to Portland being the furthest point north on the Southern Pacific's Shasta Route mainline. The Blanchet house (currently standing) is next door on the corner of 4th and Glisan.

The Dirty Duck Tavern was established in 1979. In 1984 it was purchased by Gail Kennedy and opened to the Gay Community, with mayoral candidate Bud Clark as a guest bartender. Kennedy's grandmother, Erma Anderson, had ran Dinty Moore's, an early Portland gay bar in the 1950s, followed by Mama Bernice's in the 1960s and the Other Inn in the 1970s. It its twenty five years of operation, the Dirty Duck was a fundraising stalwart against the AIDS crises. When it lost its lease in 2009, the Dirty Duck was the longest lived gay bar in Portland in a single location.

Also in the mid-1980s, in the space next door, Greg Sage, leader of Portland's great punk / post-punk band The Wipers built a recording studio where the albums such as Land of the Lost and Straight Ahead were recorded.

When the Kiernan Building is demolished, more than bricks and mortar is being removed. 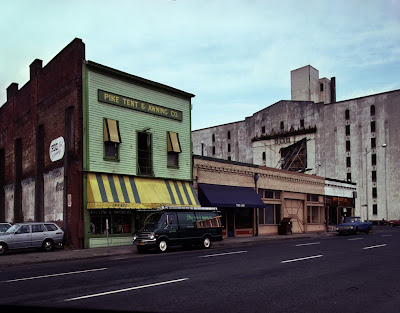 "We are not removing something significant; removing the blight would be quite helpful." -Architect Joe Pinzone, who is designing the new Blanchet House to be built on the site of the Kiernan Building. The Oregonian, February 4 2010.

The 4 to 1 city council vote (Amanda Fritz, the sole vote against demolition) opens up a number of questions:

Could the Kiernan Building had at least been partially incorporated into the new development?

What will be the effect on Portland's historic fabric, now that the precedent of demolishing contributing structures in historic districts is established?

Is Portland so smitten with LEED ratings and new construction as to overlook the value of the embodied energy (the energy and materials used to extract, transport and build) in pre-existing structures?

For all our talk of sustainability, does Portland like to wear green only when it is sexy?


I'll be hosting a history talk at McMenamins Edgfield for the Oregon Encyclopedia on Tuesday May 25, at the Power Station Theater, at 6:30, all ages welcome. The topic is "The Third Streeters and the Great Light Way" a version of the program I did in October for the Architectural Heritage Center. It is the story of downtown Portland's move west, with lots of pictures.

The Wipers, Land of the Lost, recorded in the Kiernan Building in 1986.

It is sad that this building is to be destroyed. I think you have made some very good points about other possible options for Blanchet House. It seems as though some in our City Council forget that part of the soul of Portland is it's history.
I have been following your blog for several years now and I am always appreciative of your efforts. Thank you for another excellent post.

Dan, thanks for the context you're providing for this building. I have a 1915 photo of it on oldoregonphotos.com which you can find there by searching for "dirty duck". Feel free to use it in your talk, and use the contact form on on the site to get me your email and I'll send you a file without the watermark if you'd like.

Is the Blanchet house itself likely to be the next to go?