At the Pig and Whistle

The city was energized with round the clock activity as it strained to meet the war effort. In less than one year’s time, had been transformed into one of the country’s primary shipbuilding centers. Above the shipyards at , and Vancouver was the all night glow of klieg lights atop metal towers that illuminated the activities of the workers below. The sounds of construction never ceased. 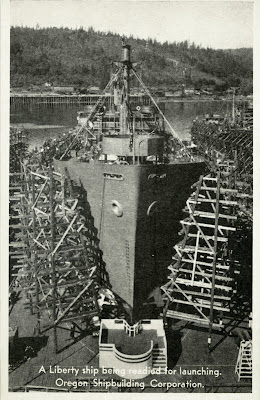 Henry Kaiser’s Shipbuilding yards at .
(click on images to expand)

The city was massively overcrowded.

’s population jumped from 305,000 to 359,000, ’s from 50,000 to 99,000. Households took in boarders to help with the overload. Downtown some theaters never closed. Movies were scheduled at three in the morning to keep roofs over the heads of transient workers. Twenty-four hour restaurants were commonplace. Eventually a whole , Vanport, and a large development on were built to meet the housing crisis.

was awash with arrivals and departures from all over.
News would come from the war zones of Europe, the Pacific and . On the home front, Portlanders bought War Bonds, grew their own vegetables and dealt with rationing.

Ration stamps issued to Ruth Holliday age 36, “housewife and clerk” who lived at .


From downtown taverns and bars the sounds of records by Benny Goodman, Tommy Dorsey, the Andrews Sisters and Sinatra spilled into the streets, along with Vera Lynn- a favorite to the hundreds of homesick British sailors who temporally called home. 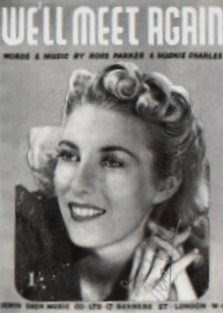 For, along with building ships for the U.S. Navy and Merchant Marine, was building aircraft carriers for . 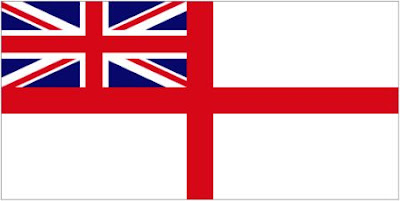 The White Ensign of the Royal Navy.

and ’s ties go back a long time.

At the start of the 1840s, “the Clearing,” as the future site of was called, was a rest stop half way between ’s Hudson Bay Company’s outpost on the at and the American settlement at . The British enterprise was by far the regions largest employer, the center of a fur trading empire which stretched from the Rocky Mountains to the Pacific and to .

In fact, for the first three years of ’s existence, it was on land claimed both by the and the . Only after the Oregon Treaty of 1846 was sundered from Her Britannic Majesty, ’s protection.

Twenty four years after the peaceful settlement of the “Oregon Question” the British were back in with a consulate, established due to the huge amount of goods leaving Portland's harbor to and Empire. 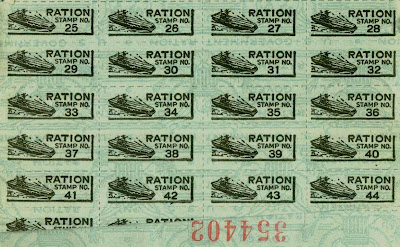 Franklin D. Roosevelt’s Lend Lease program was implemented in March 1941 to help in its lonely fight against Nazi Germany by trading war material for military bases. After December 7, it became a full fledged partnership.
As “the Arsenal for Democracy” the focused its industrial strength to provide ships, airplanes and munitions for the entire Allied war effort, regardless of nation.

It was an order to build fifteen freighters for that brought industrialist Henry Kaiser to to establish Oregon Shipbuilding in the first place. A similar order provided twenty “liberty ship” freighters to the .
Russian crews, often captained by women, attracted much attention in while they waited for their vessels to be completed. After launching, the ships, some named for scions of old local families, were handed over to the Soviets and renamed. 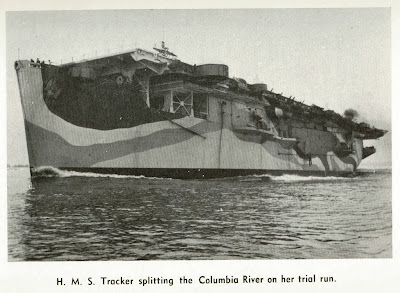 The H.M.S. Tracker on the .
-From “Good Fellows All” by Ann Grace Chapple.

The ships, essentially flight decks mounted on freighter hulls, were identical to escort carriers built at the same time at and . They were launched as US ships before being handed over to the Royal Navy. In each case, a C3 Freighter hull built at the Seattle-Tacoma Shipbuilding Company yard in Tacoma was towed Portland to be completed as an aircraft carrier by the Commercial Iron Works or Willamette Iron and Steel. Program for the commissioning of the H.M.S. Slinger, , August 11, 1943.
-from www.royalnavyresearcharchive.org.uk 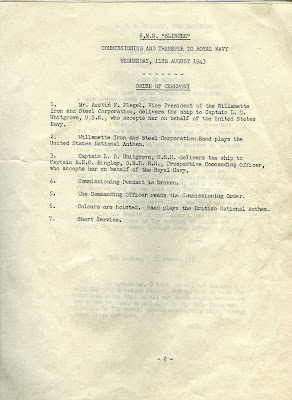 Order of Ceremony; the ship (the U.S.S. Chathem) was handed over by the Vice President of Willamette Iron and Steel to the Navy. The National Anthem was played. The ship was then presented to the Royal Navy. Colours were hoisted and God Save the King was played. The H.M.S. Slinger was commissioned.

The crews were a long way from home.
Jack Hill of the H.M.S. Slinger recalled (on royalnavyresearch.org) leaving the Devonport Naval Barracks at in south western , not knowing where they were bound for. Only after boarding the Queen Mary did the sailors know they were going to the . A week later they arrived at . After a three week layover on Staten Island they were taken from ’s Grand Central Station by train across the continent.

When they got to , there was a reception waiting. 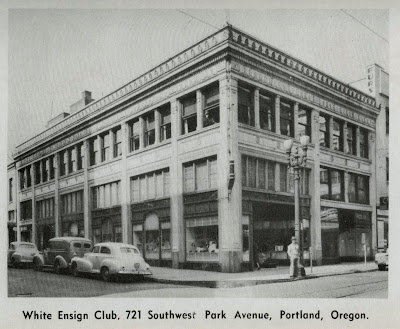 The corner of SW Park and SW Morrison. -From “Good Fellows All” by Ann Grace Chapple.

To give the sailors a taste of home while in Portland, the White Ensign Club (named for the banner of the Royal Navy) was established on the second floor of the building on the southwest corner of Park and Morrison. Ann Grace Chapple, Secretary of the British War Relief’s branch, herself a British “war bride” of World War I, organized the effort and worked with the Portland Federation of Women’s Clubs and other community organizations to bring it about. 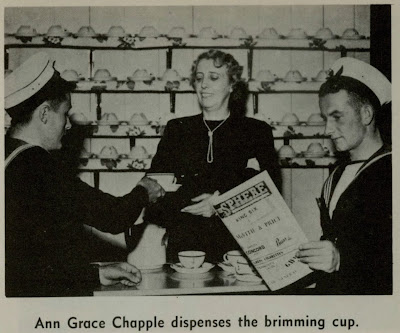 The White Ensign Club opened on December 22 1942 with piping by the Clan Macleay Pipe Band and a live broadcast by KOIN radio. The club took up the second floor of #721 SE Park in a space in space provided by the Zell Brothers rent-free which had been last used by The Shanghai Café, a Chinese Restaurant that closed in 1937. 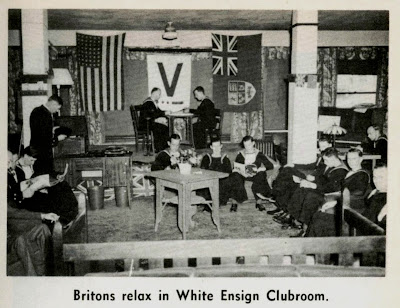 It was a place to relax and catch up reading the Illustrated London News, the Liverpool Daily Post, Newcastle’s Sunday Sun, the Cardiff Weekly Mail and the Glasgow Daily Record.
It was where native cuisine; scones, hard boiled eggs, roast beef, Yorkshire pudding and especially tea could be had.
Through British War Relief, housing was arraigned and local activities set up. Darts, pool and ping-pong played. Dances were held with local hostesses and an all female orchestra called the Mountain Jennies. Over 600 books, donated by Portlanders filled the library.

American Football proved a big hit, with the White Ensign Club playing the Albina Roughnecks to a tie at least three times in . American potato salad was not so popular. 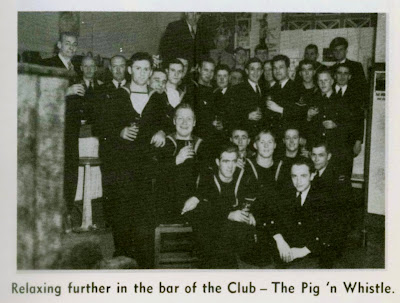 In the back of the club was a pub, the Pig & Whistle, perhaps ’s first self-consciously English styled pub. The “Peg 'n Wassail” was immensely popular, but for variety there was plenty of competition with the New Virginia Café, the Nob Hill and the Knotty Pine beer parlors on the same block. 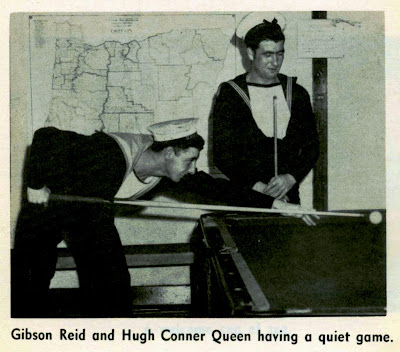 Pool at the Pig & Whistle. Note the map of in the background.
-From “Good Fellows All” by Ann Grace Chapple. 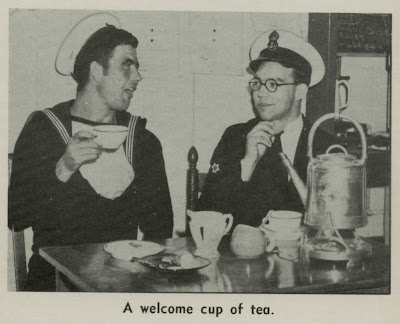 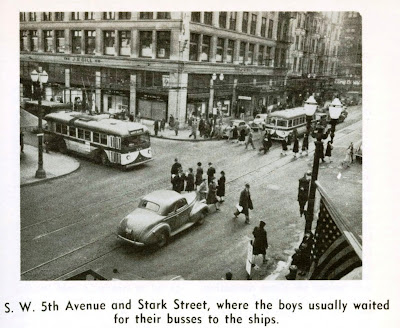 The crews stayed in as their ships reached completion and through the ships trails on the Willamette and . Then they would then depart for ’s Burrard Shipyard for further work to meet Admiralty specifications. From there it was either to the British Pacific Feet or through the Panama Canal to the . 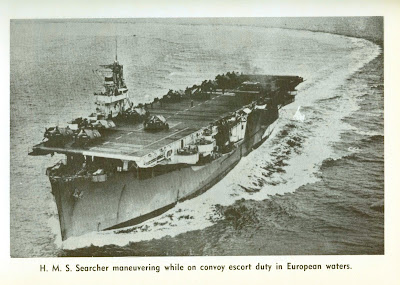 Happily, all eight of the British escort carriers survived the war. Like many of their kind, they were reconverted to freighters and sold to shipping companies around the world. By the mid 1970s all had been scrapped.

The White Ensign Club closed in 1945, after taking care of a group of sixty eight members of the Royal New Zealand Air Force from bases in on the way to the South Pacific. 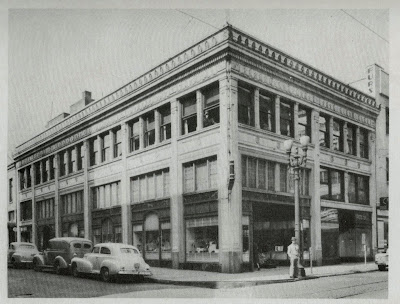 The building that held the White Ensign club at SW Park and Morrison was built in 1917, designed by architect John V. Bennes. It still exists. 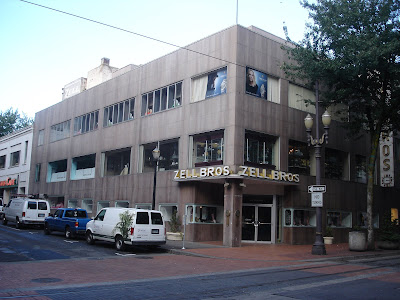 But not for long. The building was remodeled for the Zell Brothers in 1949 by architectural firm of Dougan, Himes and Cain. It is set to be demolished for the building of the new 410 foot tall . 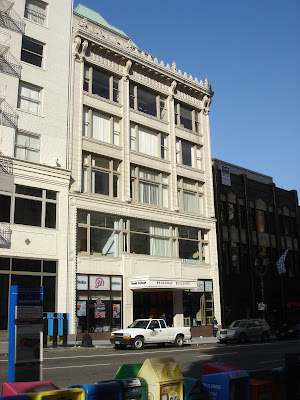 A block and a half away, on Broadway between Morrison an Alder, the , built in 1917 and also designed by John V. Bennes recalls the flavor of the original Zell Brothers building.

After the closure of the club and the publication of “Good Fellows All” by Anne Grace Chapple in 1945, the White Ensign Club faded from ’s memory.
It probably lingered longer with the British sailors looking back from half a world away.

Or, as Don Woodman of the H.M.S. Tracker wrote in his poem “To Portland”

City of , City of
No one supposes I’ll come again.
Yet ere my way I’m wending,
Friendship is mine unending…

May I suggest the next time,
At the Horsebrass, the Moon and Sixpence
or the Rose and Thistle,
We raise a glass to the Pig and Whistle! 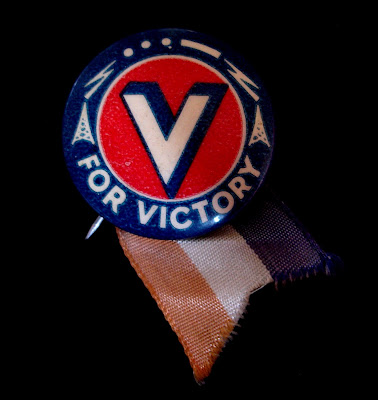 “Good Fellows All, the Story of the White Ensign Club” by Ann Grace Chapple.

“Architectural Guidebook to ” by Bart King.

“Fleeting Opportunities: Women Shipyard Workers in and During World War II and Reconversion” by Amy Kesselman

“The Growth of a City” by E. Kimbark MacColl.

“The ” Edited by Thomas Vaughan.

My name is Tony Drury, I am a Naval Historian and web master of the Royal Navy Research Archive web site.

We have a common interest in the Portland built escort carriers; I wonder if you could e-mail me?