The Wizard of Oz Moment

1939 was a good year for movies;
“Gone With the Wind,” “Mr. Smith Goes to ,” “Stagecoach” and “Ninotchka” all premiered that year.
It was also the year when Dorothy and Toto departed sepia-toned for the Techicolored Land of Oz in her quest for the . 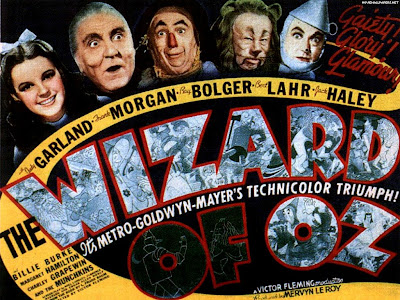 Two years earlier, ’s Traffic Engineering Bureau was established under the Commissioner of Public Works. As population and vehicle ownership increased, the streets of were becoming more dangerous to drivers, bicyclists and pedestrians. The Bureau was established to control all matters pertaining to the design and placement of traffic signs, signals and other traffic control devices. 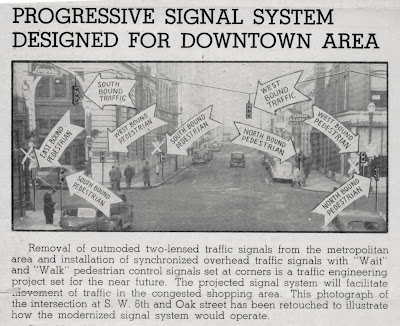 In the fifteen years since 1925, more than 900 persons have died as the result of traffic accidents in . The city experienced one traffic death every five and one-half days in the 1930’s.
- Traffic Safety Commission August 1940. 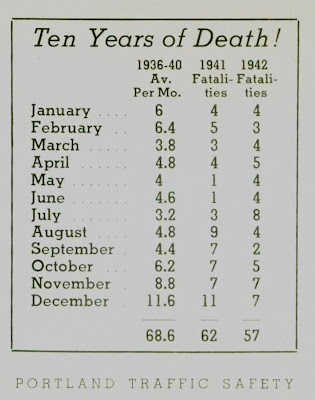 In addition to the Bureau, the Portland Traffic Safety Commission was established to educate the public on traffic issues. Drawing from traffic engineering, law enforcement, commercial, education, legislative and community sectors, the Traffic Safety Commission published a bi-monthly newsletter promoting safety for all modes of transportation in . 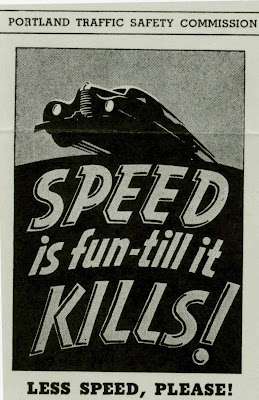 An area of primary concern for both the Portland Traffic Engineering Bureau and the Portland Traffic Safety Commission was the adoption of traffic signals to bring order to the city’s chaotic streets. In 1939 the Traffic Engineering Bureau made a film which combined new and older footage shot at intersections to document the progress made in traffic control.

Below are excerpts from that film:

The first segment features the intersection of and 6th. It dates from Christmas 1936. There does seem to be some form of traffic control in place, however imperfect. The VC streetcar stands for the Line, the original light rail connection over the . The small WH () streetcar is a World War I era Birney “Safety” design that featured a single operator. Note the automobile that uses the streetcar to get through the intersection, only to be held up by a wave of pedestrians. The short view at SW 6th and Alder which follows shows bike riding to be a dicey proposition.


"Things fall apart; the center can not hold; Mere anarchy is loosed upon the world"
-William Butler Yeats, in "The Second Coming".

The intersection of Interstate Avenue and East Broadway in 1939. Pandemonium and entropy.
It was listed in the Civic Review of , 1937 as the city’s most dangerous intersection. Chaos reigned supreme as sheer force of numbers and the will to power ruled the left turn lane.

The buildings on the corner still exist today across the street on Broadway from Memorial Coliseum.
Note: the pedestrian transit islands, accessed by subterranean tunnels near the . Both streetcars, old and modern and trolley bus (trolley coach) transit can be seen on the Broadway, and lines circa 1939. Near the end of the clip, the streetcar on the Broadway line loses its connection with the wire and a motorman leaves the safety of his car to reconnect. 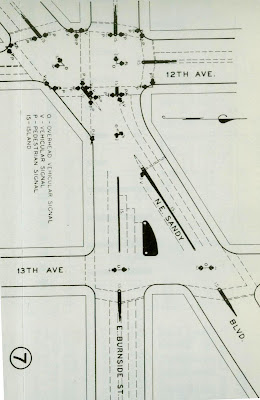 The dreaded intersection of E. Burnside, and 12th was already a formidable nemesis in 1939.
Above; the Traffic Commission's plan to tame it with traffic signals.


The intersection of Burnside, 12th and in 1939. Six seconds pass, then without warning, The Wizard of Oz moment! Pre-World War II changes from black and white to color! Note ’s electric buses (trolley coaches) in both 1937 (green) and 1939 (cream and red) paint schemes. Clean, quiet and green!.

SW Morrison and 18th near Civic Stadium (). Note the green streetcar in Traction’s paint scheme adopted in 1925, at the suggestion of school children. Approximately one third of ’s streetcars were repainted from their original dark red and cream paint (also seen in this clip) before reverting to a lighter shade of red in 1939. By the time color photography was common in the later 1940s; the green streetcars had been repainted or retired. Color views are extremely rare. It is only in this film that have I seen them.

6th & Morrison, pre-bus mall era, shot from in front of the Portland Hotel and the Pioneer Courthouse. The traffic cop’s circle-spot could not have been comfortable.

West Burnside and 18th in 1939, looking east towards where I-405 was not yet dug. The green bus is a gasoline powered “stinkbus” (as the diesel bus precursors were known).
The next views are from 19th looking north toward Burnside. Firefighter David Campbell’s memorial park can be seen to the side.

Sandy Blvd at 28th, followed by 33rd, (west then east, check out the action at the flashing yellow light) then at 24th and 20th.

Some of ’s more thorough historians dedicated themselves to preserving the memory of the streetcar system. Departed masters such as John Labbe, Bill Hayes and David L. Stearns sought to capture the Portland’s street railway era as it vanished (there is some irony here).

It was through surviving cohorts of that fraternity where I first heard of this legendary film which was reportably retrieved from a city dumpster in the late 1950s (the music is almost certainly a later addition).
Eventually, through a shadowy world of relic hunters and historians, I was able to obtain a VHS copy, which I converted to DVD and excerpted for this post.

The – Traffic Safety Challenge Cup.
won it in 1940 for having the fewer traffic fatalities. Does anyone know which city won for other years? Or where the cup is now? 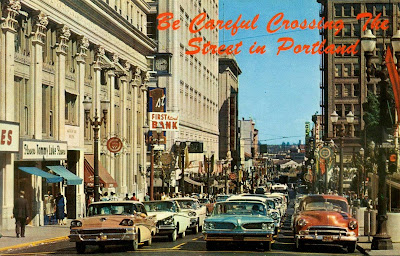 This is really great information Dan... as someone who covers the bike scene I would love to use this for a story of my own on BikePortland.org.

Please drop me a line if you can at jonathan (at) bikeportland (dot) org.

fascinating- i so look forward to your posts

That was REALLY great!

Thanks for posting this!

Thanks for posting this and for letting Jonathan at bikeportland write about it. Great commentary too. As the Willamette Pedestrian Coalition director, I would love to use these videos and the info in future presentations.

Sadly it appears youtube has removed these videos. I guess next time I'll have to watch immediately...

WHY WOULD YOU TUBE DO THAT?

THEY ARE STILL PLAYING!

Yes. The videos are still on YouTube. I'm enjoying them this morning. Dan, thanks for sharing these! I found them through Jonathan's post on BikePortland.org. I would like to use some of this information for npGREENWAY. Please send me an e-mail if you can at scott.mizee (at) npgreenway (dot) org.

I have been following your blog for quite sometime. I am a lifelong Portlander who ate at Nohlgren's All You Can Eat for 99 cents with my parents on the way to the Oregon Centennial in 1959. I noticed that you mentioned you transferred the traffic videos to DVD. I'd love to get a copy so that I could watch them at home (where I have a slow internet connection). Can you contact me about that possibility?
stephensasser@gmail.com

Damn, those are some of the finest moving images I've seen since I watched old footage of the Brewery Blocks. Thanks for the great post.

Although I am not an old Portlander, I am a native and really appreciate this look into the past! Can you shoot me an email at andrew (at) andrewoliver (dot) net , I would love to get hold of some nice quality scans of those ads for safety to put up in my house if possible...

Hi Dan, I'm working on a documentary about the area and would love to find out about how to get access to the old films. Could you drop me a line? Sean Hutchinson sepahu (at) gmail (dot) com
The blog is awesome. Can't believe I'm just discovering it.